Apple's portable music players have always been popular among music enthusiasts for the quality of the audio reproduction. Sure, they don't support the FLAC or Ogg Vorbis file formats that are the audiophiles preferred method of listening, but the internal audio processing components have always lent a certain cleanness to the audio quality. 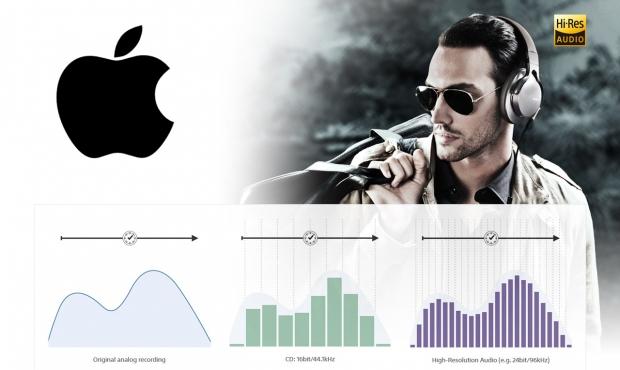 At the Portable Audio Festival that took place in Tokyo over the weekend, there were some companies that were exhibiting high-res audio gear that are close enough to Apple to be able to speak to Mac Otakara about the possibility of Apple moving towards high-resolution audio for their streaming service, Apple Music.

According to those sources, which are unnamed, Apple is looking to try for a 2016 release. This would be a huge advantage to Apple because no other popular music-streaming service currently offers bit-rates quite as high as the Hi-Res standard of 24-bit/96kHz would entail. That would certainly put it into audiophile territory.

Right now, the current iPhone can only play 16-bit/44.1kHz audio through the headphone jack and the Lightning connector is limited to just 24-bit/48kHz. Several audio players do support those bit-rates, but they are purpose-built devices. Of course there is controversy over whether there are any benefits to such high bit-rates and whether or not any nuances in audio compared to typical CD quality can be heard.

Apple has been rumored to be killing off the 3.5mm headphone jack entirely in favor of the Lightning connector for all accessories, so perhaps this is a means to satiate the desire to be able to hook up good headphones to their devices. This doesn't make up completely, because good IEM's exist that can be driven just fine by portable audio players. But perhaps Apple will release an adapter for 3.5mm headphones as well.