AMD has refreshed its 'Never Settle Forever' game bundles which includes games for AMD Radeon R7 Series to even AMD Radeon R9 295 x2. At the same time, AMD will also be including entry-level GPUs for its game bundle programs: R7 250x, R7 250 and R7 240 GPUs. 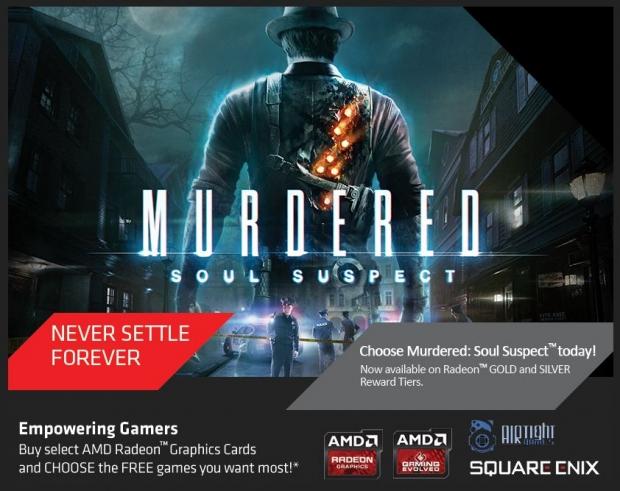 The newer buyers of AMD Radeon cards can receive up to three free games that AMD provides via the card's AMD Radeon Reward Coupon. As they have done so in the past, the choices of games paired with the respective video cards are divided into Gold, Silver and Bronze.

One of the games that will be added is Square Enix's upcoming title 'Murdered: Soul Suspect'.

Matt Skynner, corporate vice president and general manager, Graphics Business Unit, AMD said,"We're happy to introduce this next chapter for our highly successful 'Never Settle Forever' program, delivering on the promise we made a year ago with our Unified Gaming Strategy."

Square Enix's Murdered: Soul Suspect will be bundled with Radeon Gold and Radeon Silver rewards pack. AMD is also now including titles from indie game developers and is bundled in 'indie pack'. The titles are as follows:

The latest card lineups for Reward levels and benefits are as follows: