Microsoft is planning to release an update to the Xbox One tomorrow that will bring a feature to the console that many of its users have been asking for. The update will install the ability for Xbox One owners to upload captured in-game footage directly to their YouTube account without the need to download it first. 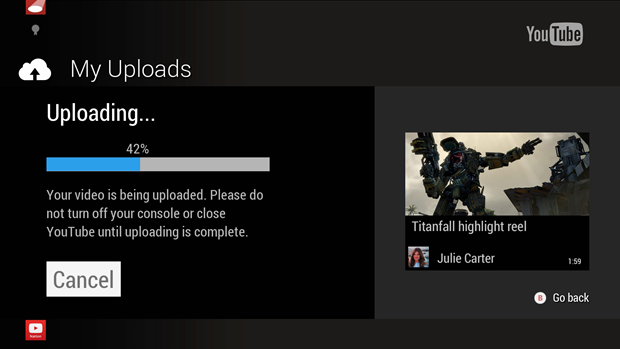 "Game DVR and Upload are among the most used apps on Xbox One. We know how important it is to be able to easily watch and share video clips, and starting tomorrow we're rolling out an update to the YouTube app on Xbox One that integrates Game DVR and Upload with YouTube**, making it easier than ever to capture and share game clips with the world," Microsoft said in a blog post. "Now, use Game DVR to capture epic gaming moments, edit them in Upload Studio, and, with the simple click of a button inside the YouTube app (look for My Uploads**), share them instantly to your YouTube channel. The updated YouTube experience also allows you to watch YouTube videos in Snap Mode, earn Media Achievements, and adds YouTube channels to OneGuide for instant access to YouTube videos right next to your favorite TV listings or App Channels."