Low on cash, but craving a comic book fix? Marvel has your back. From now until March 15th, Marvel Unlimited is offering a month of their popular digital subscription service for just 99 cents - that's nearly 90% off! 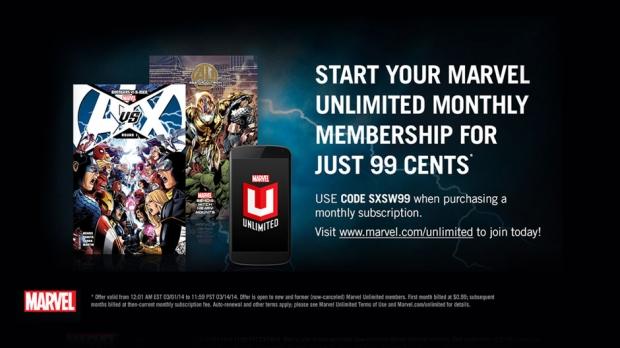 So what do you get for 99 cents? By subscribing to Marvel Unlimited for just 99 cents, users will get access Marvel's digital platform, where they will have access to a massive digital comic library of 15,000 comics. In addition to streaming digital comics, users can also download up to twelve comics at a time for offline viewing. To sweeten the deal, Marvel Unlimited subscribers also receive access to members-only deals on Marvel merchandise and new-release Marvel comics.

Marvel's "Ultimate Sale" on Marvel Unlimited subscriptions is in celebration of SXSW 2014, but it is also a way of bringing traffic to their improved platform. When Marvel Unlimited initially launched, the platform featured an abundance of comics, but the continuity of big name players like Thor and Iron Man were relatively sparse; the reading experience was also less than fluid, with some pages seemingly taking a lifetime to properly load.

Marvel believes they have fully addressed these issues in the newest version of their digital platform. Kristen Vincent, Marvel's Vice President of Digital products claims they heard user complaints loud and clear, and they have created a "smoother reading experience," and have filled in the continuity gaps; Vincent claims Marvel Unlimited now has "every issue of IRON MAN and THOR," and is "very close to having full runs of CAPTAIN AMERICA and AVENGERS as well."

Don't miss out on the chance to fill your head with all of the righteousness of Thor or the genius of Tony Stark that you can handle! To get your hands-on a monthly subscription to the new and improved Marvel Unlimited platform, then hop on your smartphone, head into your respective app store, and download the app today for just 99 cents. Act now though -the offer only lasts until 3/14/2014 11:59 PST.