According to leading market tracker, Jon Peddie Research (JPR), GPU shipments increased in Q4 2013. During this three-month period, AMD lost market share against its rivals in Intel and NVIDIA. 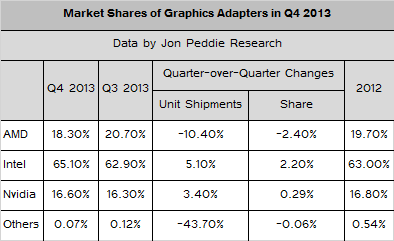 JPR reports that the PC market increased 1.8% quarter-to-quarter in Q4 2013, but declined 8.5% year-over-year. 66% of PCs shipped for the year used integrated graphics, with just 34% of PCs featuring discrete GPUs. Shipments of GPUs rose 1.5% from the previous quarter, but down 2.4% from the same time of 2012.

If we look at the numbers, AMD's overall units shipped dropped 10.4%, with Intel's total shipments increased 5.1% from the third quarter, with NVIDIA's grab increasing by 3.4% compared to Q3 2013. With year-over-year numbers, AMD's market share slipped 5.4%, Intel increased by 5.4%, and NVIDIA also saw an increase, of 0.9%.