Many business men and women have moved over to using their personal or company-supplied smartphone during conference calls because it does not tether them to their desk or a landline. Logitech has just released a new device that will enhance the speakerphone experience for those users. 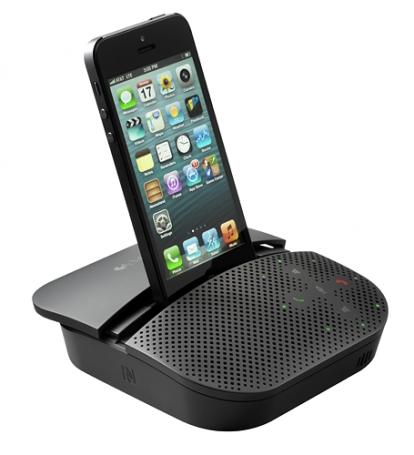 The all new Mobile Speakerphone P710e is described as a peripheral for phones, tablets, and computers that connects via USB or Bluetooth. A built in slot on the top allows users to "prop up" tablets and phones that gives them a proper angle for viewing during video calls. The device can pair with up to eight bluetooth devices, and if the phone or tablet is NFC equipped, pairing is as simple as a quick bump.

Answering calls is easy as well, and is as simple as using the devices on-screen controls or touching the dedicated buttons on the top of the speakerphone unit. Noise cancellation, and a dynamic audio equalizer are present as well. The Mobile SPeakerphone P710e can be powered by and AC Adapter, USB cable, or through a built in battery for those times when the conference call must take place pool side. The P701e will begin shipping in November and will cost $170.