It wasn't too long ago that Hugo Barra joined Chinese manufacturer, Xiaomi, but if you forgot who Barra is, well, he was only the former Vice President of Global for Google. 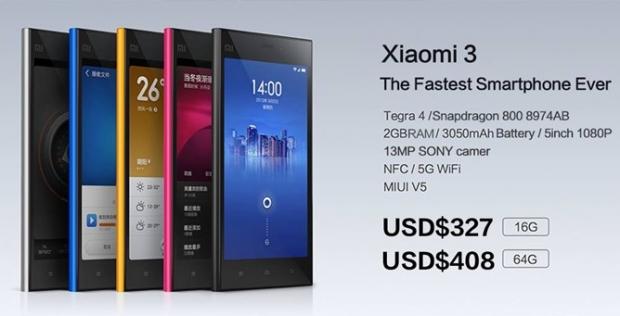 The first smartphone to launch while Barra is with the company is the new MI3, which is quite the smartphone indeed. We have multiple versions of the phone, which are all limited to China unfortunately. The first is a WCDMA model, with the second being a CDMA2000 model. These two models will feature the Qualcomm Snapdragon 800 processor, with four cores clocked in at 2.3GHz each.

If you purchase the TD-SCDMA version for China Mobile, then you'll enjoy an NVIDIA Tegra 4 SoC. All variations of the MI3 feature 2GB of RAM, but when Xiaomi claim "the fastest smartphone ever" it is referring to the MSM8974AB model which features the Snapdragon CPU, which boosts the clock speeds for the memory interface and Adreno 330 GPU.

All variations of the MI3 feature a 5-inch 1080p LG-supplied display, 13-megapixel rear-facing f/2.2 camera from Sony, and a non-removeable 3050mAh battery. In terms of colors, there's a bunch of options: black, white, pink, yellow and blue. The MI3 is just 8.1mm thick, and features a beautiful design.

The Xiaomi MI3 will feature the MIUI 5, which is a modified version of Android 4.1, which features Xiaomi's infrastructure that replaces the Google Play Store. The pricing on the MI3 is the killer part of it here, at just $327 for the 16GB version, and just $408 for the 64GB version - which is quite astonishing considering the huge price gap we see in other manufacturers' phones with larger flash memory inside.

The biggest problem is that the Xiaomi MI3 is limited to the Chinese market unfortunately - if only it was available worldwide, this could really shake things up with the right marketing behind it.