Researchers at Cern in Switzerland have some interesting things to play with, and have now proved the merits of a way to test antimatter as a source of the thing we all want to see in our futures: "anti-gravity". 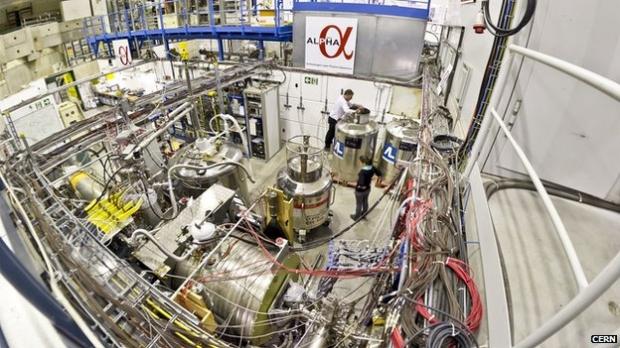 Antimatter particles are the "mirror image" of normal matter, but have an opposite electric charge. Antimatter and its relationship with gravity is still a mystery, but it may just simple "fall up" rather than down. Researchers reporting in Nature Communications have made a few steps toward solving this notion.

Antimatter continues to be one of the biggest question marks in physics, where equal amounts of matter and antimatter should have been created at the Universe's beginning. But, if the two were to shake hands, they destroy each other in what is called annihilation, turning into pure light. Cern's Alpha experiment is here to help the researchers hopefully solve this.

Alpha is an acronym for Antihydrogen Laser Physics Apparatus, which is an experiment in itself, designed to build and trap antimatter "atoms". Antihydrogen is an atom made of their antimatter counterparts, antiprotons and positrons. Researchers can't just make them, they have to make it hang around long enough for them to research it, before it bumps into any matter and annihilates.

The Alpha team back in 2010 achieved this, and in 2011 they showed that they could keep antihydrogen atoms trapped for 1,000 seconds. The team has now gone back to their original data on 434 antihydrogen atoms, with the anti-gravity question in mind. Spokesperson for the experiment, Jeffrey Hangst, has said:

In the course of all the experiments, we release (the antihydrogen atoms) and look for their annihilation. We've gone through those data to see if we can see any influence of gravity on the positions at which they annihilate - looking for atoms to fall for the short amount of time they exist before they hit the wall.

The team have been hard at work, making a statistical study of which antihydrogen atoms went where - up or down - and they are able to put a set of constraints on how the anti-atoms respond to gravity. The best limits the team can suggest is that they are less than 110 times more susceptible to gravity than regular atoms, and less than 65 times that strength, in the opposite direction - anti-gravity.

Right now it's all an experiment, but think of the possibilities 20, 30, or 50 years from now.