Alongside today's GTX Titan launch, NVIDIA announced a new integrated Tegra processor that features LTE. The Tegra 4i is the first chip from NVIDIA to feature LTE and should allow the GPU giant to enter the smartphone market. Previously, Tegra chips had been relegated to tablets due to the lack of an LTE radio. 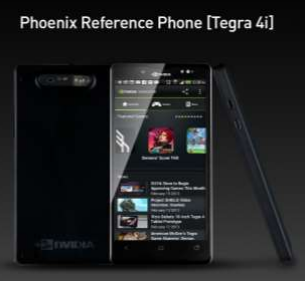 NVIDIA claims that the new Tegra 4i is the fastest and most efficient mobile chip. Jointly developed by ARM and NVIDIA, it makes use of the R4 Cortex-A9 CPU for its four cores and features a fifth battery saver core. The GPU features 60 custom NVIDIA GPU cores, so graphics performance should be stellar for a mobile device.

"NVIDIA is delivering for the first time a single, integrated processor that powers all the major functions of a smartphone," said Phil Carmack, senior vice president of the Mobile business at NVIDIA. "Tegra 4i phones will provide amazing computing power, world-class phone capabilities, and exceptionally long battery life."

Along with the Tegra 4i announcement, NVIDIA debuted a reference smartphone platform known as "Phoenix." NVIDIA hopes that smartphone manufacturers will be able to quickly bring devices to market using the Tegra 4i. They can consult the reference device to enable quicker development and deployment.