Store shelves could soon be bare of Samsung products, if Judge Koh accepts Apple's preliminary injunction request. We knew that Apple would go after sales bans after winning by so much over Samsung, we just didn't know which products. Now, Apple has filed with the court listing the models that they would like banned. 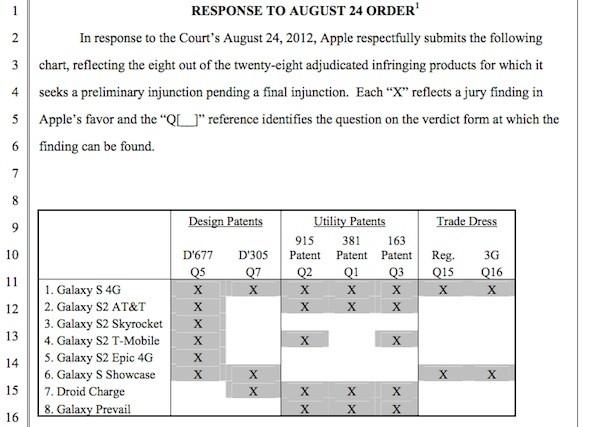 Apple is going after the eight devices listed in the chart above. Why wouldn't they go after all 24 of them? Well, a large majority of them are no longer being sold and Judge Koh doesn't like having her time wasted, as Apple and Samsung found out, so they've narrowed the list down to a more reasonable amount.

I really find it interesting that the Galaxy S II Epic 4G was found to be infringing. It's the phone I personally own and use and it looks nothing like the iPhone, at all. It will be interesting if Samsung can manage to get the jury's verdict overturned by Judge Koh or by an appeals court.