It looks like Samsung's T-Mobile-branded phone, now known officially as the Galaxy S Blaze Q is nearly here. The image below is thanks to TmoNews, and its showing off that it's a slider, and sports a full QWERTY keyboard. 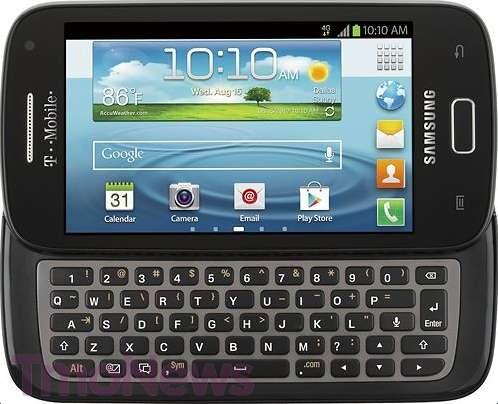 The Galaxy A Blaze Q comes out on August 15, and Samsung had already stated they would be announcing a new Galaxy on this date. How does the Blaze Q spec against its other Galaxy brothers? Well, we're looking at a 1.5GHz dual-core Snapdragon S4 processor, 1GB of RAM and 16GB of internal storage.

Display-wise, it reportedly contains a 720p display, and a rear camera capable of taking 1080p video. It should arrive with Android 4.0 Ice Cream Sandwich, but it might come with an schedule for an upgrade to Android 4.1 Jelly Bean.