The poor laptop has only been out for a few days and someone has already stripped it down to its most basic components. That's right, iFixIt has pulled the $2000+ laptop apart and found some interesting things, along with taking lots of pictures. The short summary is that they say it is the least repairable laptop they have ever taken apart. 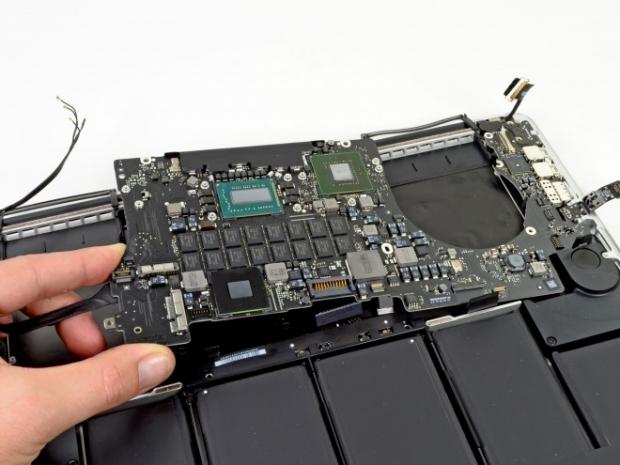 The Retina MacBook is the least repairable laptop we've ever taken apart: Unlike the previous model, the display is fused to the glass, which means replacing the LCD requires buying an expensive display assembly. The RAM is now soldered to the logic board - making future memory upgrades impossible. And the battery is glued to the case, requiring customers to mail their laptop to Apple every so often for a $200 replacement. The design may well be comprised of "highly recyclable aluminum and glass" - but my friends in the electronics recycling industry tell me they have no way of recycling aluminum that has glass glued to it like Apple did with both this machine and the recent iPad.

The design pattern has serious consequences not only for consumers and the environment, but also for the tech industry as a whole.

Kyle adds that Apple started going this direct 8 years ago when they preformed a market experiment. They released the non-upgradeable MacBook Air alongside two MacBook and MacBook Pro lines. The Air sales managed to take 40% of all Apple laptop shipments by the end of 2010. Kyle explains about the 2008 Air:

The 2008 Air went in a new direction entirely: It sacrificed performance and upgradeability in exchange for a thinner design. Its RAM is soldered to the logic board (as in the Retina MacBook Pro), so upgrading it means replacing the entire expensive logic board. And like all laptops, the Air has a built-in consumable. The MacBook Air's battery was rated to last just 300 charges when it was introduced. But unlike laptops before it, replacing the Air's battery required specialized tools and removing some 19 screws.

The iPad and iPod Touch have similar design issues where they aren't as fixable as they used to be. Many things were glued into them when they first came out and it's only gotten worse. Now, the glass is fused to the frame in one of the newer iPads. So, if you ever want to be able to work on your laptop, don't get the new Retina MacBook Pro.