In addition to showing off AMD's future roadmaps, Mark Papermaster showed off a cool triple-fan professional graphics card called the FirePro W9000. The card is detailed in the slide shown below and is meant to be a professional version of the 7970. Curiously enough, however, is the fact that the card he held up and the card in the slide appear very different. 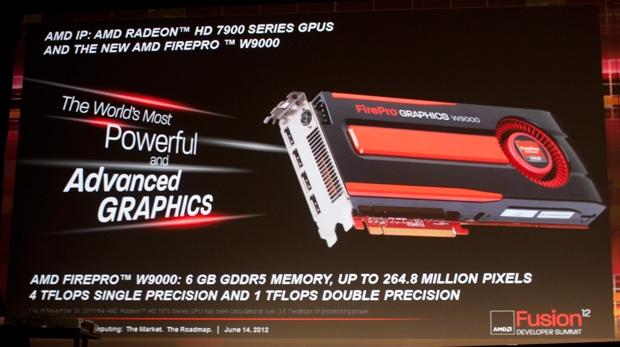 Cyril Kowaliski of TechReport noticed the difference as well and put a call into AMD's Dave Erskine to get an answer. Erskine would only say that it was a "dual-GPU product that will be released later this year." Taking a good educated guess, I would say that the card is most likely a 7970x2 (7990?), or in other words, two 7970 chips on one PCB.

After all, AMD has to compete with NVIDIA's dual-Kepler beast, the GTX 690. AMD has been making dual-GPU consumer cards for something like 4 generations now (3870x2) and were rumored to be debuting one at Computex. That debut never occurred, but it seems unlikely that they wouldn't produce a dual-7970 card. The release time frame also indicates that it should be of the Tahiti flavor.