Harry Potter's invisibility cloak is pretty cool. But it's just fantasy, isn't it? Well, by applying some technology, scientists have been able to make a breakthrough in cloaking objects from heat-sensing cameras and the like. This is done by controlling the flow of heat, either focusing it into a small point, or spreading it outside of an invisibility zone. 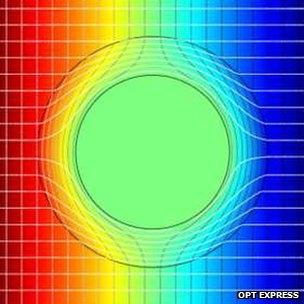 the technology will most likely go to the military, where something similar has been proven to hide a tank. This technology also has applications in computers, because it is fundamentally shuffling heat around at will. In computers, heat is still a major challenge for engineers. "We can design a cloak so that heat diffuses around an invisibility region, which is then protected from heat," Dr Guenneau explained. "Or we can force heat to concentrate in a small volume, which will then heat up very rapidly."

It could also be used by thieves, provided they can steal it from the military in the first place. They would be able to hide from police helicopters at night, or from thermal imaging alarm systems. Harry Potter's cloak is becoming reality. It will just take more time and research.