CES 2012 - One of my final meetings at CES was with the folks at BitTorrent in their suite at the Hilton hotel. We were given an introduction to some of the new features inside the latest version of the BitTorrentPlus client.

Brad from BitTorrent started by giving us a demo of "Disconnected" on the BitTorrentPlus client and its ability to transcode files that have been received through the BitTorrent network. He downloaded a torrent file (a .3gp file) from a mobile phone and while it's playable on a PC, it's not playable on other devices such as media players. 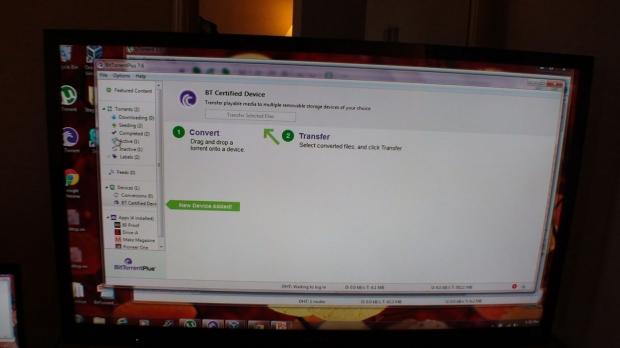 It's really a simple and quick process to convert the file, copy to a USB drive and then plug into a BT certified device (in this case a Blu-ray player) and playback the file which was converted from a .3gp file to a .mkv file which is supported by a vast amount of media players. No longer are you required to use third party tools which can be complex to convert files. It's all done within the BitTorrentPlus client.

Next up we got a demo of "PC Connected" which allows you to very easily stream your downloaded torrents from your PC to your TV using a BitTorrent enabled device. In the video above you can see a prototype Broadcom box which allows streaming of your torrent content over the network.