Airport body scanners that use X-ray technology have been banned across Europe. Officials have said in a press release that the X-ray technology is now deemed off-limits in order to not risk jeopardizing citizens' health and safety. 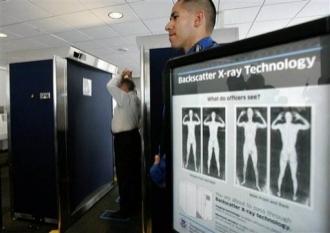 Tiny bits of radiation emits from X-rays and have long since been connected to cancer in rare instances by physically damaging DNA. In a letter to ProPublica from the FDA, the agency claims that the risk of fatal cancer from scanners is 1 in 400 million.

Another report from ProPublica says that anywhere between six and 100 US airline passengers could develop cancer each year from walking through the machines. The TSA has responded to the EU's decision to ban the X-ray scanners, revealing that 300 dangerous or illegal items have been found on passengers by using the X-ray scanners. One would think that over the entire course of years using the scanners that finding 300 dangerous or illegal items, is worth the better chance of not getting cancer from the scanners?

The EU has banned the machines in favor for other types of scanners that are not X-ray-based. The replacement technology will use millimeter wave technology which uses low-frequency radio waves instead of radiation. Airports in the US have already deployed this technology and now use both the radio wave tech and X-ray scanners.

Roughly 250 X-ray machines are deployed across the US, as well as 264 millimeter wave body scanners. Body scanners also have their downs, with the ability to see under clothing, revealing hidden objects such as explosives that a metal detector wouldn't find, as well as the ability to check out intimate body parts. You can opt-out of this and receive a pat down by a TSA official, if you wish.