I am floored. Absolutely floored. Engadget livebloggers were unnerved by the people weeping in the audience, but I completely understand it now. Joe Brit and Hugo just finished up the Keynote by giving everyone in the audience the new Samsung Tablet, but let's talk about what Joe Brit revealed: The new Android @ Home network, which allows you to use your house as an android accessory. We're not just talking TVs and communicating with wireless capable devices- in fact, the complete opposite. This is cutting-edge NFC that lets a CD talk to a box, or your phone to turn lights on and off. 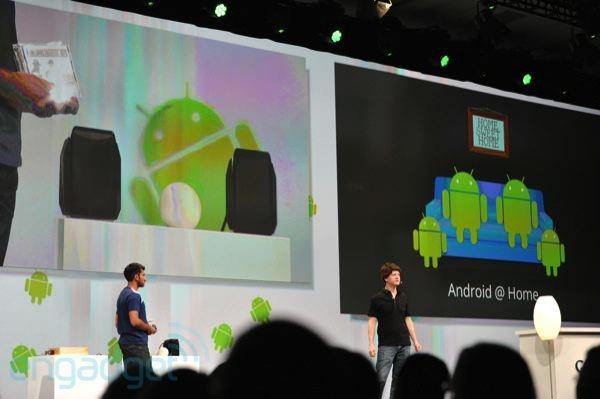 I'm thinking thermostats, toasters, refrigerators-pretty much the sky is the limit right now. Google has partnered with Light Signs, a company that will be providing LED light bulbs controllable by Android by the end of the year.

You take the last word out of that sentence and that's where we're headed with this. Brit talked about the development possibilities, including an alarm clock that slowly raises the lights in your room. Or designing a gaming experience that interfaces with your home to provide more immersive sensations. Imagine, you're in Hoth on a Star Wars level and the temperature drops in your room. Or lights flash every time you frag someone in Quake (which they demoed during the speech)

Also of note, Project Tungsten (still in protoype), is the hub that allows even more connectivity with animate objects in your home. I watched as they placed a CD in front of a receiver, only to hear a chime. "That sounds means the entire CD has been downloaded into my library." One more chime, and the first song on the album was playing. All thanks to a little NFC doohickey inside the jewel case, which activates only if you remove the packaging. Tungsten is always in the cloud, and always running. Once again, still in prototype phase but we'll hear more in the next few months.
Newsletter Subscription