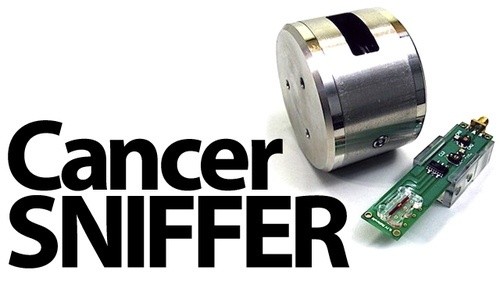 Mehmet Toner who is a Harvard Medical School professor of biomedical engineering along with MIT aeronautical engineer Brian Wardle came up with adapting Toner's project (on which he worked on for four years) which is being used in hospitals currently. Wardle used his knowledge of aeronaturics to streamline the carbon nanotube-studded device, making it stronger and capable of collecting cancerous cells eight times better than Toner's original device was capable of.

CAMBRIDGE, Mass. - A Harvard bioengineer and an MIT aeronautical engineer have created a new device that can detect single cancer cells in a blood sample, potentially allowing doctors to quickly determine whether cancer has spread from its original site.

The microfluidic device, described in the March 17 online edition of the journal Small, is about the size of a dime, and could also detect viruses such as HIV. It could eventually be developed into low-cost tests for doctors to use in developing countries where expensive diagnostic equipment is hard to come by, says Mehmet Toner, professor of biomedical engineering at Harvard Medical School and a member of the Harvard-MIT Division of Health Sciences and Technology.

Toner built an earlier version of the device four years ago. In that original version, blood taken from a patient flows past tens of thousands of tiny silicon posts coated with antibodies that stick to tumor cells. Any cancer cells that touch the posts become trapped. However, some cells might never encounter the posts at all.

Toner thought if the posts were porous instead of solid, cells could flow right through them, making it more likely they would stick. To achieve that, he enlisted the help of Brian Wardle, an MIT associate professor of aeronautics and astronautics, and an expert in designing nano-engineered advanced composite materials to make stronger aircraft parts.

Out of that collaboration came the new microfluidic device, studded with carbon nanotubes, that collects cancer cells eight times better than the original version.

Circulating tumor cells (cancer cells that have broken free from the original tumor) are normally very hard to detect, because there are so few of them - usually only several cells per 1-milliliter sample of blood, which can contain tens of billions of normal blood cells. However, detecting these breakaway cells is an important way to determine whether a cancer has metastasized.

"Of all deaths from cancer, 90 percent are not the result of cancer at the primary site. They're from tumors that spread from the original site," Wardle says.

When designing advanced materials, Wardle often uses carbon nanotubes - tiny, hollow cylinders whose walls are lattices of carbon atoms. Assemblies of the tubes are highly porous: A forest of carbon nanotubes, which contains 10 billion to 100 billion carbon nanotubes per square centimeter, is less than 1 percent carbon and 99 percent air. This leaves plenty of space for fluid to flow through.

The MIT/Harvard team placed various geometries of carbon nanotube forest into the microfluidic device. As in the original device, the surface of each tube can be decorated with antibodies specific to cancer cells. However, because the fluid can go through the forest geometries as well as around them, there is much greater opportunity for the target cells or particles to get caught.

The researchers can customise the device by attaching different antibodies to the nanotubes' surfaces. Changing the spacing between the nanotube geometric features also allows them to capture different sized objects - from tumor cells, about a micron in diameter, down to viruses, which are only 40 nm.

The researchers are now beginning to work on tailoring the device for HIV diagnosis. Toner's original cancer-cell-detecting device is now being tested in several hospitals and may be commercially available within the next few years.