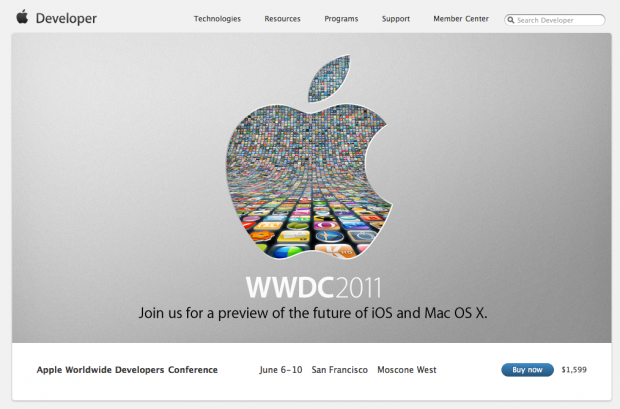 Mark your iCal's: Apple's annual Worldwide Developer's conference will be held June 6-10, right here in San Francisco at the Moscone Center (apple really likes this place, having held many a launch and conference in this same location).

If you're on Apple's mailing list, you probably already received an email with all the normal fanfare and wonder of an email from Apple. Brevity is the soul of both Wit and Marketing, and Apple figured that out a long time ago. The tagline for this year's event is "the future of iOS and Mac OS", which presumably has something to do with running out of large jungle cats with which to name the latter.

At this year's conference we are going to unveil the future of iOS and Mac OS. If you are an iOS or Mac OS X software developer, this is the event that you do not want to miss.

Also, if you are a developer, you're going to want to budget accordingly as passes are available for the low low price of $1600. Between their 30% cut on subscription apps, this steep attendance fee, and the shift from esthetically-pleasing and virginal white in their product-line to the now-pervasive industrial black and titanium color scheme, does it seem like Apple is a substantially darker enterprise than it was in the last decade?


CUPERTINO, California-March 28, 2011-Apple today announced that it will hold its annual Worldwide Developers Conference (WWDC) June 6 through June 10 at San Francisco's Moscone West. At this year's five-day conference Apple will unveil the future of iOS and Mac OS, including exciting demonstrations of the new kinds of apps that developers can build using Apple's advanced frameworks and more than 100 technical sessions presented by Apple engineers.

"At this year's conference we are going to unveil the future of iOS and Mac OS," said Philip Schiller, Apple's senior vice president of Worldwide Product Marketing. "If you are an iOS or Mac OS X software developer, this is the event that you do not want to miss."

Mobile developers will be able to explore the latest innovations and capabilities of iOS and learn how to greatly enhance the functionality, performance and design of their apps. Mac developers will see and learn how to develop world-class Mac OS X Lion applications using its latest technologies and capabilities. Developers can even bring their code to the labs and work with Apple engineers, applying development techniques and best-practices to enhance their apps.

Activities at Apple's WWDC 2011 include:

more than 100 technical sessions presented by Apple engineers on a wide range of technology-specific topics for developing, deploying and integrating the latest iOS and Mac OS technologies;
over 1,000 Apple engineers providing developers with code-level assistance, insight into optimal development techniques, and guidance on how they can make the most of iOS and Mac OS technologies in their apps;
the opportunity to connect with thousands of fellow iPad, iPhone and Mac developers from around the world; and
Apple Design Awards which recognize iPad, iPhone and Mac apps that demonstrate technical excellence, innovation and outstanding design.
Go to the Apple Worldwide Developers Conference 2011 website (developer.apple.com/wwdc) to purchase tickets, as well as for updates and more information.