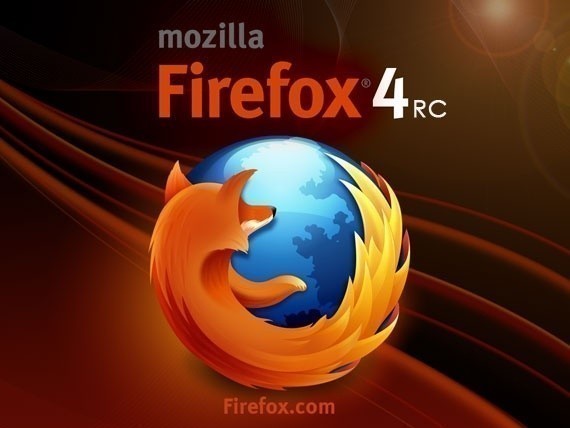 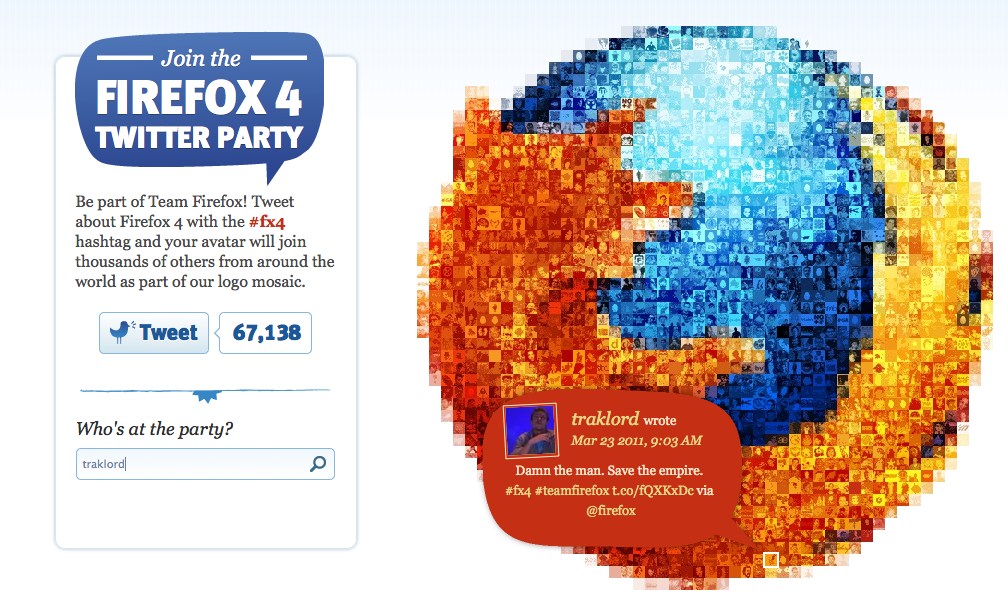 Overall, very pleased. I used to use Firefox (and I still do for some sites), but as soon as Chrome came out I was instantly hooked. Since downloading Firefox 4 this morning, I think I'm going to have to run both regularly.

Setting up Firefox 4 was interesting- I didn't import any of my browser settings for a couple of reasons: 1) I don't really use Safari anyway, so why bother(?), 2) I wanted the set-up to be as organic as possible from start to finish. Not that it matters much; I'm one of those browser users that opens multiple windows with multiple tabs in multiple browsers- my ADD prevents me from bookmarking anything. Once it's not on the screen in plain sight, it's gone forever from my radar, bookmarked or not. This is one of the reasons I was so excited about Firefox, because of the built in Tab Candy/Panorama feature that let's you group tabs into organized, easily accessed little thematic multitasking hubs. Drool. I haven't used that function much (as I've just downloaded the browser and have yet to be running +20 tabs) but I'm thoroughly thrilled that I have the option when I need it.

Pinned tabs- also a multitasker's dream. Pinning a tab gives you the option of minimizing it within your tab-bar. Firefox reduces the tab so about 1/16 of its original size, maintaining only the icon. This way, tabs that you have open all the time (Social Media Sites, Email Clients, RSS Clients etc) won't infringe upon the summaries/titles of all the new tabs you open. I've been doing it all day with TweakTown posting admin, right next to the main site for easy cross-referencing of articles.

One question though: Why can't I duplicate Tabs, Firefox? It seems like first world problems, but I really enjoy being able to right click and clone tabs, especially when opening multiple pages in a single site at the same time. Its an open-source program, so I can wait.

-Panorama and the Add-ons Manager took a bit of poking around to find. Not a huge deal, but one would think with all of the fanfare surrounding both of those options, the browser would launch the first time with them automatically loaded.

-Flash does not come pre-installed, of course, so I went to YouTube to trigger the download. I got the traditional puzzle-piece "Plug-In Required" icon, but upon clicking the "search for plug-ins" button, Firefox sadly informed me that "No Plug-Ins Existed". Uh, what? I tried searching in the Add-ons Manager for "Flash", only to get a bunch of third party apps (one of which actually disables Flash), but no standard Flash download! Finally, I just went to the Adobe site and downloaded the plug-in. It works great, but why the above shenanigans?

Overall, this browser is very user-friendly, especially for people that use Browsers as tools and not just portals to the internet. Site uploads are extraordinarily speedy, including CPU/GPU draining sites like Netflix and Hulu.

The browser war is afoot! With the 24 hour download record already under their hat, and a nothing-to-sneeze-at 5 million downloads in the first 24 hours for Firefox 4, expect this Open-Source Not-So-Dark Horse to fair very well in the upcoming battles.