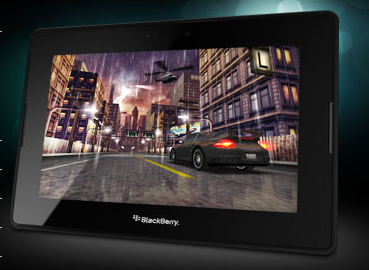 Research In Motion (RIM), Canadian company responsible for all things BlackBerry, announced its "plans" to make the new BlackBerry PlayBook Tablet available at a slew of retailers in the US and Canada. The PlayBook will be available in three unsurprising models: 16gb, 32gb, 64gb starting at $499 (for all of you keeping track, that's the same price as the iPad 2).

Though a rep at GDC '11 told me he'd lose his job if he told anyone when it was coming out, we now know thanks to Best Buy that it will be shipping April 19th.

Here's a video of some hands-on PlayBook action from GDC '11:

"The BlackBerry PlayBook is an amazing tablet that is already being widely praised as a multi-tasking powerhouse with an uncompromised web experience and an ultra-portable design," said Mike Lazaridis, President & Co-CEO, Research In Motion. "Given the high level of customer interest in the BlackBerry PlayBook, we are particularly pleased to be working with such an amazing lineup of retail partners."

* Check with each retailer to confirm pricing and availability.