All NewsBusiness, Financial & LegalCases, Cooling & PSUContests & GiveawaysCPU, APU & ChipsetsDealsDisplays & ProjectorsGamingMotherboardsScience, Space & RoboticsStorageVideo CardsVirtual & Augmented Reality
All ReviewsAll ArticlesAudio, Sound & SpeakersCases, Cooling & PSUCPUs, Chipsets & SoCsComputer SystemsDisplays & ProjectorsGamingMotherboardsNetworkingPeripheralsStorageVideo Cards
GuidesGamingAsk the ExpertsNewsletterAboutForums
Halo InfiniteBattlefield 2042Elon MuskGTA 6RTX 3080RTX 3070HDMI 2.1Bitcoin Mining
Video Cards
It's good to see both companies are on the dual-GPU hill this year. Last year AMD (well, back in 2009 it was ATI) were dominating the dual-GPU world with their 5970. Even now, it's still one of the fastest VGA cards in the world (it doesn't matter the amount of cores, just like a CPU). 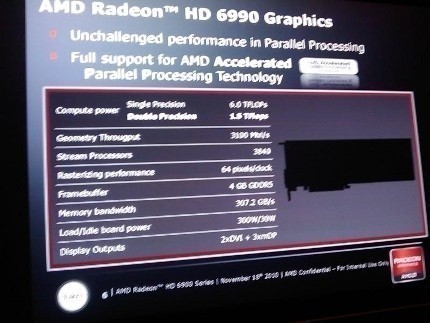 The slide shows us that it should have 3840 stream processors, 4GB of GDDR5, and fits within the 300W TDP with idle power dropping to as low as 30W. Five outputs (2 x DVI ports and 3 x miniDisplay Ports) for your Eyefinity goodness.

So, with these specs in mind, a single HD6970 could have as many as 1920 stream processors - an increase from the 1536 that has been rumored lately.

There's no 100% confirmation on this yet, but we'll see a clearer picture soon enough!
NEWS SOURCE:hexus.net