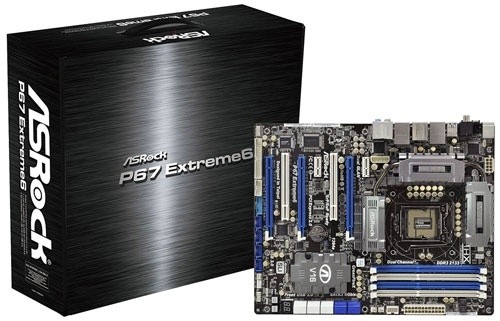 Under that board is the P67 Extreme4 with four SATA 6GB/s ports, four USB 3.0 ports, and the same triple PCIe graphics slots. Under those offerings are the P67 Pro and the P67 Pro 3 sporting two 6Gb/s ports, dual rear USB 3.0 ports and a single PCIe x16 slot and packing a 10-phase CPU VRM. That last feature is very good for the class of board.

Other new boards include the Intel H67 packing H67M GE-HT mainboard for high-end HTPC builds packing a 6-phase VRM, four DDR3 slots, and a FDI interface. The board also has four USB 3.0 ports and a lot more. A more stripped down H67M GE mainboard is also offered for the same crowd, but lacks the VRM heat sinks, internal USB 3.0 ports and a few other goodies. All of these boards should land alongside the new Intel Core processor line using the socket next year.