All NewsBusiness, Financial & LegalCases, Cooling & PSUContests & GiveawaysCPU, APU & ChipsetsDealsDisplays & ProjectorsGamingMotherboardsScience, Space & RoboticsStorageVideo CardsVirtual & Augmented Reality
All ReviewsAll ArticlesAudio, Sound & SpeakersCases, Cooling & PSUCPUs, Chipsets & SoCsComputer SystemsDisplays & ProjectorsGamingMotherboardsNetworkingPeripheralsStorageVideo Cards
GuidesGamingAsk the ExpertsNewsletterAboutForums
RTX 4090Windows 11Halo InfiniteBattlefield 2042Elon MuskGTA 6RTX 3080HDMI 2.1
CPU, APU & Chipsets
There's been a bit of a hole in AMDs mobile lineup for a while now when looking at Intel and its dominance with the Pine Trail/Atom families for the ever-growing netbook market. But it looks like the company's been at the drawing board for a while and we learn today that they do indeed have something on the cards. 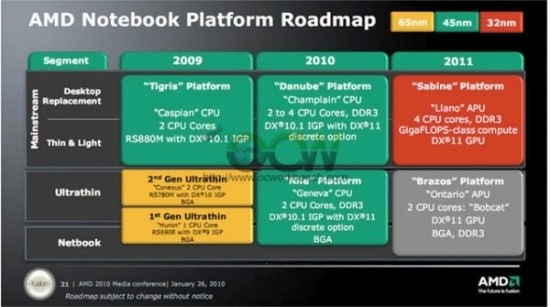 AMD's John Taylor has let it be known that the company is working on a netbook-class Fusion CPU / GPU hybrid setup codenamed 'Ontario' which he thinks they'll have ready for release by sometime next year (take this with a grain of salt given we've been waiting for any form of Fusion from the mob for years now).

The graphics side of things does sound tasty, though, with word that its integrated graphics will be DX11 supporting. Stronger graphics abilities are much welcomed in the netbook world, but with that said, NVIDIA already has a good answer for that with its Optimus based Ion 2 chipset that combines Atom's efficiency for extended battery life + discrete GPU performance. Not to mention, a lot can happen between now and this time next year; who knows where Intel will be at in this area of the market by the time AMD finally gets this product to market.
NEWS SOURCE:ocworkbench.com
Newsletter Subscription