All NewsBusiness, Financial & LegalCases, Cooling & PSUContests & GiveawaysCPU, APU & ChipsetsDealsDisplays & ProjectorsGamingMotherboardsScience, Space & RoboticsStorageVideo CardsVirtual & Augmented Reality
All ReviewsAll ArticlesAudio, Sound & SpeakersCases, Cooling & PSUCPUs, Chipsets & SoCsComputer SystemsDisplays & ProjectorsGamingMotherboardsNetworkingPeripheralsStorageVideo Cards
GuidesGamingAsk the ExpertsNewsletterAboutForums
RTX 4090Windows 11Halo InfiniteBattlefield 2042Elon MuskGTA 6RTX 3080HDMI 2.1
Video Cards
A David Smith of SolarisUtilityDVD has been made aware of a method to enable SLI on ASUS' Crossfire only P7P55D motherboard which might be of interest to those of you with the board who wish they could double up on their existing GeForce card.

As the P7P55D Deluxe board comes with SLI support (albeit at a fair bit higher price tag), it was as simple as getting into a hex editor, comparing the deluxe board's BIOS to the vanilla variant and copying the required string across to the current BIOS. 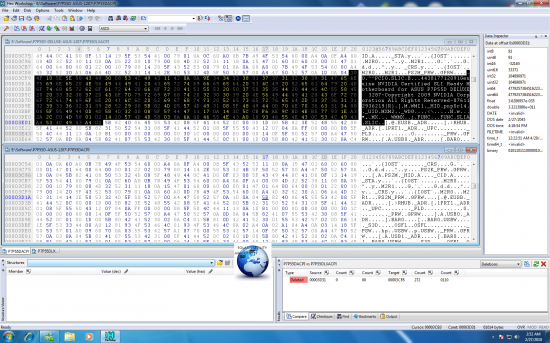 For the end user, the hack is as simple as updating your BIOS with one which has been modified to include the SLIC string that enables the support on the board.

The BIOS that was used to be modified for SLI support was 1207, There's a pile of download links for it at the source.
NEWS SOURCE:solarisutilitydvd.com
Newsletter Subscription