NewsReviewsArticlesGuidesGamingAsk the ExpertsNewsletterForums
Video Cards
Yesterday I attempted to begin my guide on bitstreaming Blu-ray HD audio from movie discs to your amplifier knowing that the current batch of NVIDIA and AMD GPUs come with this type of support. Namely the GeForce 200 series and Radeon HD 5000 series.

Suspecting it may be an issue, I quickly discovered that while the hardware side is ready to roll, the software is playing catch up. Presently, the publically available versions of CyberLink's PowerDVD do not support bitstreaming with either and we are still waiting to hear back from ArcSoft about whether or not Total Media Theater (TMT) is capable of such a feat. 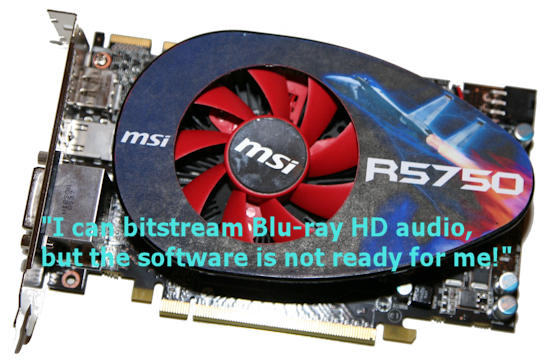 We contacted CyberLink about the issue and were told that a new build as well as standalone patch will be coming out on November 27th to add bitstreaming support for AMD's 5000 series of video cards. We also asked about GeForce 200 series support, but did not get a clear answer as a product manager was not able to respond at the time.

CyberLink is providing us with an early press build with AMD 5000 series bitstreaming support on Monday and we will begin testing then and hope that a GeForce 200 series build or patch is not too far away.