All NewsBusiness, Financial & LegalCases, Cooling & PSUContests & GiveawaysCPU, APU & ChipsetsDealsDisplays & ProjectorsGamingMotherboardsScience, Space & RoboticsStorageVideo CardsVirtual & Augmented Reality
All ReviewsAll ArticlesAudio, Sound & SpeakersCases, Cooling & PSUCPUs, Chipsets & SoCsComputer SystemsDisplays & ProjectorsGamingMotherboardsNetworkingPeripheralsStorageVideo Cards
GuidesGamingAsk the ExpertsNewsletterAboutForums
Windows 11Halo InfiniteBattlefield 2042Elon MuskGTA 6RTX 3080HDMI 2.1Bitcoin Mining
Computer Systems
Well well well, AMD is getting back into the thin and light game. After a few years of claiming the netbook was a fad and not really anything that AMD was interested in we see that AMD is preparing to release their platform for Ultra-Thin notebooks.

As is now typical with AMD this is a market they talked about and even demoed last year. However they were late to the ball game as Intel managed to get their CULVs into most thin and lights first.

So why would you be interested in AMD's version? Well there are a few reasons. The first is not as big of a deal as it sounds; this is 1080P playback for video. Now I love my HD TV and Projector, I even love the Blu Ray player on my notebook, but I my notebook is a 20-inch book so I can actually see the impact from 1080p Blu-Ray.

Since most thin and lights are between 13-15 inches 1080p on that size screen just does not make sense. Yes, you could connect it to your TV Via and HDMI or Display Port out but who is really going to do that.

The next item is actually the most important of the group; battery life.
Although no exact details were given AMD is claiming that with their newest ULV CPUs you will get an extra hour of battery life. Of course what you get in real life Vs what is put on paper are two different things. If AMD can really do this it will help out quite a bit as right now Intel is leading them in this race.

Last on the list is gaming. Now on a netbook I say that gaming is pointless and should not even be considered. It was a foolish idea for nVidia to push ION at the netbook and not reserve it for the nettop. All that Aside AMD is claiming a 77% better gaming experience over Intel's current platform. Sounds big on paper but in reality it was not a hard thing to do. Intel is not known for their powerful gaming GPUs so while it is nice to see it is not really a big deal.

At the time of writing we only know of two manufactures that are looking into using the new AMD ULV CPUs and platform (Asus and Acer) but you can be sure that more will follow. 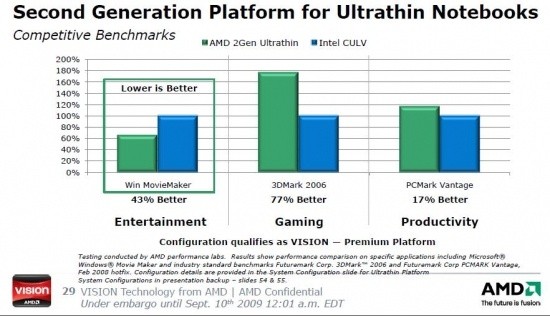