Recently a 2007 Saab 9-3 Combi was burned pretty much to the ground. The owner was barely able to rescue their dog before the car burned. Saab, after hearing of this incident took possession of the car and checked it over for anything that would have caused the blaze.

At the time of the fire the car was not running and had a "cold" engine. The review of engineers at Saab showed that there was nothing wrong with the vehicle electrically or mechanically. Using fire propagation investigative techniques they determined that the fire started on one of the seats.

There were a few items left in one of the seats, a cell phone, a camera and a personal music player. Looking at the devices the investigators noted that the music player was melted in a manner consistent combustion. This would seem to point to the music player as the culprit for the fire.

The manufacturer and type of music player was not disclosed. But it is interesting to note that in Korea Apple is recalling all of the first Generation iPod Nanos due to issues with overheating, melting and spontaneous combustion. 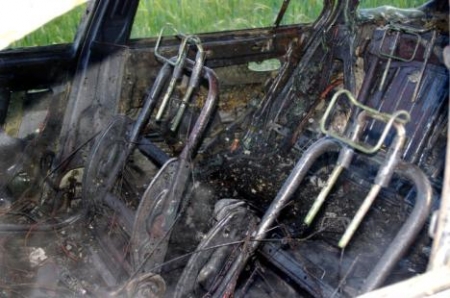