All NewsBusiness, Financial & LegalCases, Cooling & PSUContests & GiveawaysCPU, APU & ChipsetsDealsDisplays & ProjectorsGamingMotherboardsScience, Space & RoboticsStorageVideo CardsVirtual & Augmented Reality
All ReviewsAll ArticlesAudio, Sound & SpeakersCases, Cooling & PSUCPUs, Chipsets & SoCsComputer SystemsDisplays & ProjectorsGamingMotherboardsNetworkingPeripheralsStorageVideo Cards
GuidesGamingAsk the ExpertsNewsletterAboutForums
Windows 11Halo InfiniteBattlefield 2042Elon MuskGTA 6RTX 3080HDMI 2.1Bitcoin Mining
TRENDING NOW: 'Lost Atlantis' pieced together by archaeologists after 8,200+ years
Storage
Back in January 2008, the SATA-IO team announced that they were working on a Power Over eSATA initiative that would enable eSATA devices to be powered without the need for an external power source, similar to USB. Very little has been heard about it since the initial announcement. 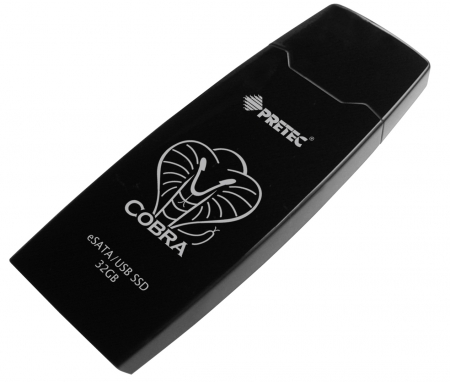 Pretec has unveiled what is the first SSD to feature Power Over eSATA. Although current motherboard still don't support the standard, the new drive will work once the hardware can support it. Until then, the drive also features a USB port.

Pretec has dubbed this the Cobra eSATA/USB SSD and it will be available in both 32GB and 64GB sizes. While the drive is capable of 90MB/s read and 60MB/s write, its speed will be limited until it can be used via eSATA due to the current limits with USB 2.0. Pretec says that they are currently shipping the drive but haven't offered any information concerning the price of the SSD.