What was impressive was the speed with which the code was written to be usable with OpenCL. The turnaround on this was pretty impressive coming in at a matter of a few weeks.

AMD has also brought the fight to nVidia's PhsyX in a different manner. Instead of going head to head with an ATi proprietary implementation, AMD has banked on a standards based open implementation.

The Havok code which can run on the CPU as well as the GPU should be easier to work with and provide a better platform for in-game physics. To make things more attractive the OpenCL based Havok code will be able to run on any OpenCL capable GPU as long as you have the proper drivers, this includes nVidia GPUs. 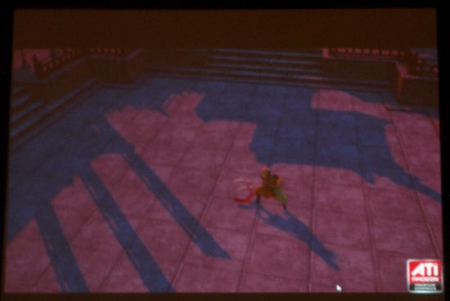 If this doesn't sound all that spectacular, it really isn't. The Havok demos are pretty standard, and the ATI one doesn't break new ground. The part that is spectacular is that it was all done in a handful of weeks. A quarter ago, this didn't exist, and now you have a full Havok implementation on the GPU, written in a standards-compliant way. It wasn't all that fast, yet, but it did work seamlessly.

Don't underestimate how big a deal this is, however. As soon as it is optimised correctly, you can parse the physics load between the CPU and GPU. If you have more of one than the other, you can still use physics in the way it was meant to be played. Oops, wrong slogan... but this implementation should actually do what the other side promises. The upshot is that game developers can use physics more liberally, they don't have to worry about minimum specs as much.