All NewsBusiness, Financial & LegalCases, Cooling & PSUContests & GiveawaysCPU, APU & ChipsetsDealsDisplays & ProjectorsGamingMotherboardsScience, Space & RoboticsStorageVideo CardsVirtual & Augmented Reality
All ReviewsAll ArticlesAudio, Sound & SpeakersCases, Cooling & PSUCPUs, Chipsets & SoCsComputer SystemsDisplays & ProjectorsGamingMotherboardsNetworkingPeripheralsStorageVideo Cards
GuidesGamingAsk the ExpertsNewsletterAboutForums
Windows 11Halo InfiniteBattlefield 2042Elon MuskGTA 6RTX 3080HDMI 2.1Bitcoin Mining
The Hard Disk Drive has been one of the major sources of power consumption and performance bottleneck for some time now. Even with the advent of the SSD and SATA 6Gbps the drives themselves still consumer power and still are not as fast as the rest of your system.

Adaptec wants to solve some of those issues at CeBit they were showing off some new technology that should go a long way to helping.

The first up was a smart form of power management that was able to slow and even stop drives attached to the same RAID array. The adapter is programmable so that you can have the drives powered through certain hours and has a battery backed-up cache system to hold small amounts of Data so that the drives are not always spinning up and down.

Next up was a capacitor based battery backup that is tied to a flash module. This means that in the event of a power failure; data is written to flash memory from the cache which can be maintained by the capacitor.

The last bit of tech involves using an SSD as a form of smart cache. This new idea still has some issues to be ironed out, including the limited number of writes flash memory has. 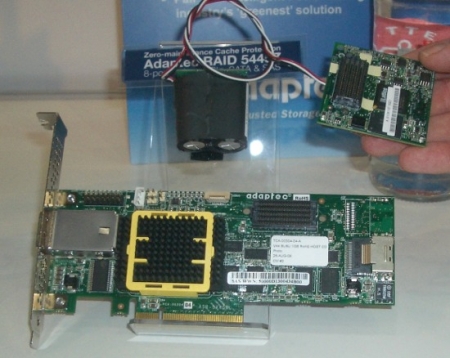 The other problem is a bit more fundamental, flash has limited write cycles, somewhere around 100K writes before things go a little off, and instead of lossy compression, you get lossy storage. People concerned with things like correct numbers on their bank statement don't like this. If you divide the maximum write speed of an SSD by the capacity * write life, you end up with a little over six months of life at 100% writes.

To combat this, Adaptec is being intelligent about what it caches on the SSD. This may sounds like a simple thing, but it is much akin to someone giving you a block of marble and saying "Just take out everything that doesn't look like a statue", not easy. The work being done here is to figure out what to cache and when, not just where.