MSI in their copious wisdom has launched a new internet device. That all by itself is nothing big nor is it anything to laugh about. Then I read that it will be called "Winki" now if you are like me you probably just laughed a bit at that one given what Winki commonly refers to. Next up is MSI's tag line.

Which is odd since it runs a stripped down version of Linux.

In the end what you have is very similar to the Linux OS that Asus uses in their Express Gate. You get Firefox for internet Skype for VoIP and chat as well as Pidgin for you other messaging needs. 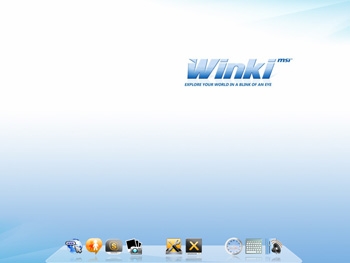 Winki leverages a Linux base, but, through MSI's skilled research, this new internet device revolutionizes the way most people will think of Linux. All installations and settings have been simplified and made more straightforward - by simply connecting an onboard USB Pin-header and going through a brief set of system settings, one can begin to take advantage of this tiny, convenient tool. With support for 15 languages, adapting to this device was made easy for the global user. More importantly, Winki's greatest ability is how it compares to other OS supported devices: it starts up faster, uses less electricity, will not have problems caused by virus and, best of all, and does not cost customers a penny more.

By the way, Winki optimizes functionality by grouping together a powerful team of software solutions. This suite includes Mozilla's Firefox handles web browsing, while Skype takes care VOIP phone call and other common applications so users won't have to spend a lot of time learning whole new programs. One worth mentioning is instant messaging (IM) software called "Pidgin", which supports up to 15 different kinds of IM accounts at the same time. No matter what account your friends are on, you are sure to be in contact with them all. Go with a Winki Edition product, and enjoy the express and convenience by Winki.