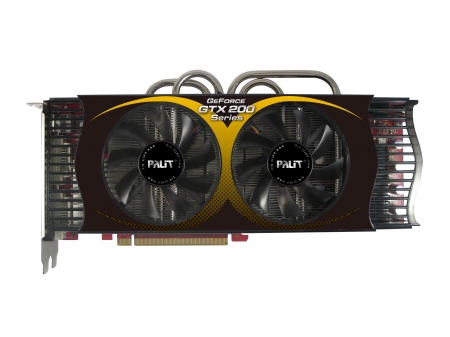 Speeds for the card are 648MHz on the core and 2500MHz on the memory. The new GTX 285 2GB also features a custom designed heatsink with two PWM fans and four heatpipes. This new dual fan cooling solution provides a high performance and trustworth cooling solution and should allow for some more room when overclocking compared to the reference cooler found on stock GTX 285's. Palit is also offering the new cooler for a 1GB GTX285.

Palit innovative dual fan cooling system for the GTX 285 series comes with two PWM fans and four heat-pipes to provide high performance and trustworthy cooling solution. Conceived for two GPUs, the two PWM fans are able to provide sufficient air flow to cool GPU on the graphics quietly. The PWM fan created for both fans can adjust the fan speed depending on the GPU's temperature. Palit's GeForce GTX285 also supports NVIDIA CUDA technology, unlocking the power of the GPU's processing cores to accelerate the most demanding system tasks (such as video transcoding) to deliver up to 20x the performance over traditional CPUs.