The new build number is 7022 (the Original Beta 1 was 7000) and offers very little under the hood improvement but has some GUI changes. The Home Group has received a new Icon, the Control Panel has been dulled down as well as other minor changes to the looks for the OS.

Microsoft has declared that Windows 7 is feature complete so the next few builds will really be nothing more than UI refinements and bug fixes. The next public release should be RC1 around April; this puts us in line for an early 2010 release. 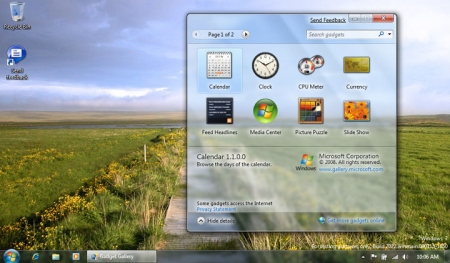 Indeed, build 7022 is the first build I've seen that was actually created this year: Remember that the Beta (build 7000) dates back to early December 2008.

As you might expect of an interim build of a product that was deemed feature-complete months ago, build 7022 doesn't include any major changes. But it does have a few small UI tweaks that become obvious after mousing around the system even for just a few minutes. For example, HomeGroup picks up a new icon (it used to be a house, and is now more unique looking). The weird expanding task list from previous versions of the Control Panel is gone, replaced by a less animated and duller-blue rendition. There are a few other small changes as well.