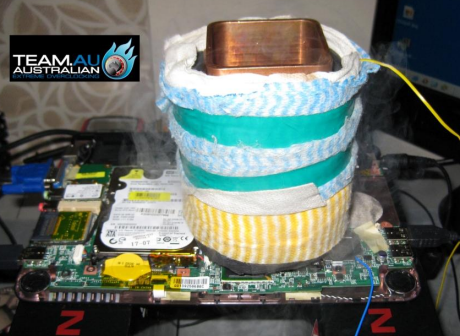 He ripped the machine to bits, added an LN2 block cooler to it and with some LN2 and around minus 16 degrees Celsius later, the TEAM.AU overclocker managed to clock the poor little sucker N270 CPU all the way up to 2.4GHz, from its default clock speed of 1.6GHz.

Recently we spoke to one of the members from TEAM.AU at an MSI overclocking event where they said they would do this - and they did it. No hardware is safe from this onslaught of OC abuse and we like it.

You can see the CPU-Z Validator page here and there is more over at the XS forums, right here.