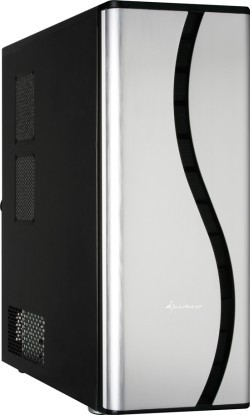 The Value is the better equipped of the two, housing a 140mm intake fan at the front and 250mm on the side panel, whilst the Economy leaves a space for the front intake and two 80mm side panel fans, should the owner want to make use of them. 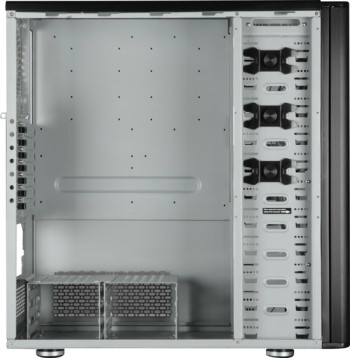 The case is completely tool-less inside and Sharkoon has thought of liquid cooling users by including two openings at the rear for the tubes to be fed through. The top-mounted I/O connectors include four USB 2.0 ports, headphone and microphone jacks as well as an eSATA port.

Pricing looks to be very reasonable for these well equipped cases, with the Value and Economy models coming in at around 90 and 80 Euros respectively. You can view Sharkoon's product page covering its new Seraphim series of full-tower enclosures here folks.

SHARKOON presents the Seraphim, a new Full Tower case with a two-part front door concealing the eleven front bays. To keep temperatures cool, the Value-Edition comes with a pre-installed 250 mm side fan and a 140 mm front fan.

Thanks to the included quick-fasteners, the installation of optical drives, hard drives and expansion cards is incredibly userfriendly and does not require any cumbersome screws.

On the top portion of the front panel are 4 USB, 1 eSATA, headphone and microphone ports. Six hard drives fit comfortably in the two hard drive cages.

The Economy Edition has black side and top panels, but is available with a black or silver front door.