All NewsBusiness, Financial & LegalCases, Cooling & PSUContests & GiveawaysCPU, APU & ChipsetsDealsDisplays & ProjectorsGamingMotherboardsScience, Space & RoboticsStorageVideo CardsVirtual & Augmented Reality
All ReviewsAll ArticlesAudio, Sound & SpeakersCases, Cooling & PSUCPUs, Chipsets & SoCsComputer SystemsDisplays & ProjectorsGamingMotherboardsNetworkingPeripheralsStorageVideo Cards
GuidesGamingAsk the ExpertsNewsletterAboutForums
Halo InfiniteBattlefield 6Elon MuskGTA 6RTX 3080RTX 3070HDMI 2.1Bitcoin Mining
Storage
SSDs seem all the rage today everyone is talking about them. We hear how they are the future, how they are bad, and how ridiculously expensive they are! 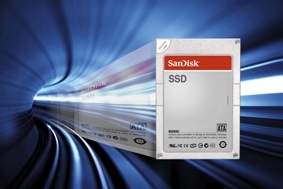 To maximize random write performance, SanDisk developed the ExtremeFFS flash file management system. This operates on a page-based algorithm, which means there is no fixed coupling between physical and logical location. When a sector of data is written, the SSD puts it where it is most convenient and efficient. The result is an improvement in random write performance - by up to 100 times - as well as in overall endurance.

ExtremeFFS incorporates a fully non-blocking architecture in which all of the NAND channels can behave independently, with some reading while others are writing and garbage collecting. Another key element of ExtremeFFS is usage-based content localization, which allows the advanced flash management system to "learn" user patterns and over time localize data to maximize the product's performance and endurance. "This feature might not show up in benchmarks, but we believe it is the right thing to do for end-users," Heye said.