At first it was believed that motherboard makers would need to add one or two nForce 200 chips to their boards, but that was not a good solution - too expensive, too hot and a PCB space-eater. 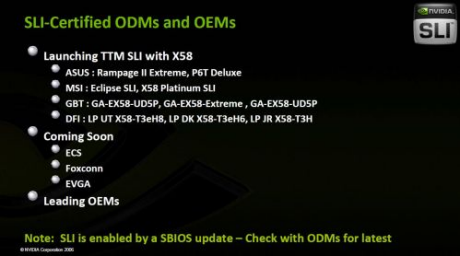 More recently, we heard news that NVIDIA would allow SLI on X58 based boards without the need of using the unpopular NF200 chip, but now further news falls the cracks with the word being that NVIDIA will charge motherboard makers an SLI licensing fee and the exact amount and details has leaked out into the public.

After the motherboard makers sends their board for NVIDIA approval and validation, the maker will need to agree to pay NVIDIA a licensing fee of $5 USD for each board it sells with the SLI logo.

After the motherboard makers send a big fat check over to the US from Taiwan, SLI will be enabled via an SBIOS update.