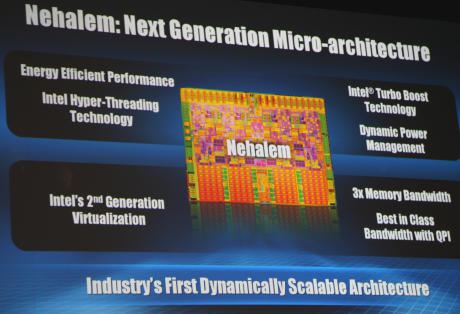 Intel's upcoming Nehalem-based Core i7 processors are due to go on sale on November 17. Stephen spent a little bit of time, among other things, explaining exactly how Intel's Turbo Boost (or Turbo Mode) technology will work on its new CPU.

Don't forget to take a look at the video below but basically Intel has spent a lot of time not only on ensuring extreme performance from Core i7 but also tried to consider power as much as possible, too. Turbo Boost works by dynamically adjusting the clock speeds of each core depending on what type of application is being used.

For instance, if you are using a multi-threaded application, all four cores will stay switched on and run at 100% clock. If, however, you are only running an application which is single threaded, all of the cores besides one will be switched off and that single core will get a speed boost with a higher clock speed.