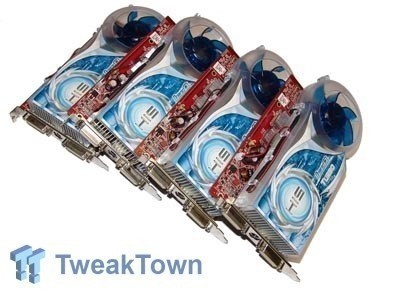 While ATI's Crossfire might not be our favorite dual graphics technology, for users of Intel 975X and 965P chipsets, your choice of multi GPU's are limited. While the high-end ATI market makes Crossfire an annoying task, the low and mid-range sector is quite effortless. It actually works the same way as SLI minus the need for a connector bridge.

The latest budget bad boys to come flying out of the gates from ATI are the Radeon X1300XT and Radeon X1650PRO. Today we have with us the X1300XT DDR3 model from HIS and the X1650PRO DDR3 model also from HIS. We are testing these cards in Crossfire and by themselves and chucking in an X1900GT for good measure.

We will be checking out what exactly is on offer from the cards (apart from another four copies of Dungeon Siege) and have a quick look at the cards themselves. From there we will get stuck into testing and see what happens throughout our benchmarks which tests a bit of everything - technology like HDR, AA, AF, OpenGL and of course Direct3D are all covered.

Let's not rant any longer and have a look at what is on offer from each of the cards.

The X1300XT and 1650PRO boxes are practically identical to each other. Both offer the IceQ cooling along with pre-overclocked speeds. We see that 256MB of DDR3 is also present on both cards. We can see the Crossfire logo along with HDTV, TV-Out and of course Dual Link DVI support for people using 30" LCD's from Dell or Apple. 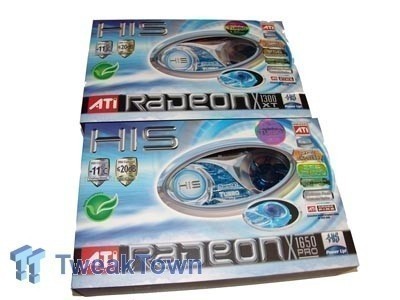 Turning box the boxes over they again both are almost identical too each other - the back is actually even closer to each other with really the only thing differentiating them being the card model at the top of the box. Both support identical features as you can see across the bottom of the box. 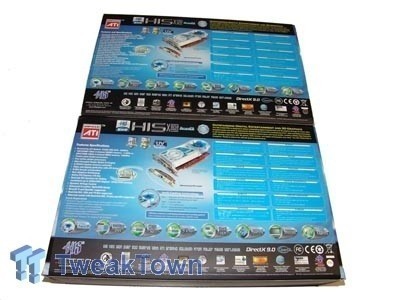 Both boxes contain exactly the same content between them bar the manual - one is for the X1300 series and the other the X1600 series.

Apart from the manual we have a driver CD that you will probably find yourself needing to use at the moment thanks to the lack of official support on these cards with the latest Catalyst 6.9 drivers. We also have the normal HIS bonus DVD. It comes with.....wait for it....Dungeon Siege, along with a number of demos, some Cyberlink software and a few other trial applications. 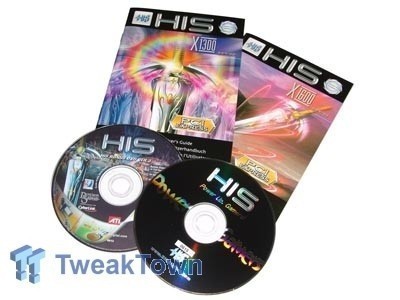 Cable wise we have a Component out adapter for HDTV out put, S-Video cable, S-Video to RCA connector, 2 DVI to VGA adapters and a grill that covers second half of the card. 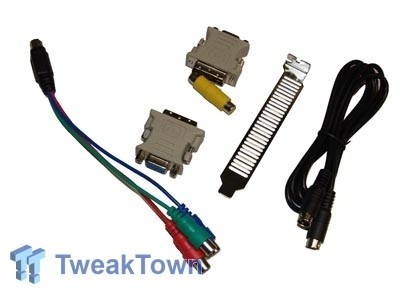 We didn't expect the package to really be that different between the cards and as you can see for yourself, they aren't. We can also see that at first glance through the box the cards don't look all that different but let's continue on to see what is on offer. 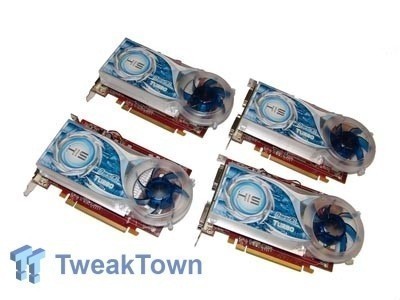 The front of the cards shows us big IceQ coolers and prevents us from seeing much of the card. For the parts we can see, jumpers, headers, stickers and capacitors they are also in identical positions.

Turning over the cards finds identical layouts - it is obvious that the PCB used is exactly the same and the only difference is the GPU found underneath the heatsink fan. Four screws hold the heatsink in place and with only 256MB of DDR3 all the memory is located on the front of the card which leaves us with a rear that is pretty boring. 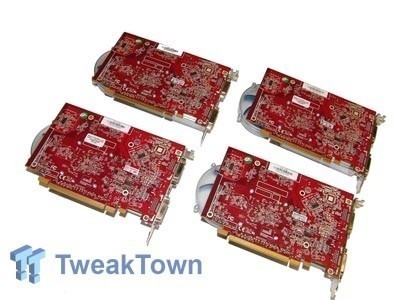 Both cards are in the top end sector of the X1300 and X1650 line up so with them both offer Dual DVI and TV-Out we again find the cards looking exactly the same. 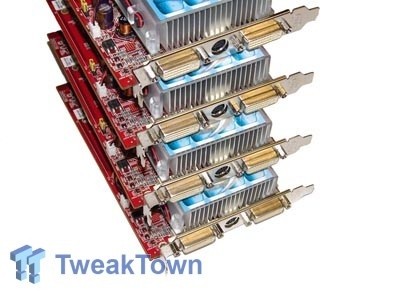 Specifications of the Cards

Moving the specifications of the cards we also find them very close to each other, the main difference of course is the fact that one uses the X1300XT core and the other uses the X1650PRO core.

Core speeds are 587MHz and 625MHz with the earlier being the 1300XT and the latter being the 1650PRO. Both graphics cards sent to us from HIS are "TURBO" models which means with the included software you can automatically increase the clock speeds to a predetermined value. For all of our testing, we ran the cards at their overclocked "TURBO" speeds.


When it came to testing there was clearly a few answers we wanted out of the article.

As we mentioned in the introduction, we have also included the higher-end Radeon X1900GT to see where the cards sit in comparison to something that is slightly more expensive than two X1650PRO cards in Crossfire and of course the X1300XT which is about 15% cheaper than the X1650PRO according to our sources but hard to find.

Is it worth going to the trouble of setting up Crossfire or should you just stick with a single high-end graphics cards? Let's allow our benchmark numbers to do the talking.

We can see that the difference in performance between the X1300XT and X1650PRO is quite small. The performance increase to Crossfire is easily seen.

We also see at the lower resolution the performance of both cards in Crossfire sit quite close to the X1900GT. When moving to the higher resolution though we can see the more powerful X1900GT takes a significant lead.

When we move to Crossfire mode the difference between the two cards is slightly greater at the higher resolution and we can also see the X1900GT has a clear lead over the X1650PRO CF setup but nothing super exciting.

When we move to our first real-world game we can see that in Crossfire the cards score very close to each other. By themselves we can see more difference but we can see that the X1900GT really separates itself from the other cards.

HDR tests show similar results with the only difference being the single card setup scores being closer together unlike the non-HDR tests.

PREY shows us that the single card solutions are very close together as well as the Crossfire setups but the X1900GT has a commanding lead.

F.E.A.R minimum FPS is all over the place at the high resolution but when we look at the average we can see that the single card setup is extremely close to each other.

When moving to Crossfire we can see the 1650PRO is slightly slower and we can also see that the X1900GT sits along way ahead.

In our first HQ test we see very similar results to what we have seen throughout all of our benchmarks.

Both Crossfire setups offer us a playable setup but we can again clearly see that it lags behind the X1900GT.

PREY again sees that the X1900GT sits very close to what the Crossfire X1650PRO and X1300XT can offer.

The low and mid-range setup of ATI Crossfire dual graphics is not only painless to do but also offers some pretty kick ass performance. It's also quite a cheap option for people who want to get some descent performance at a low cost.

With the ability to buy a Radeon X1650PRO for around $160 AUD in Australia, you could buy one now and get some pretty good performance. Later you could buy a second card which will enable you to bump that resolution up above something like 1280 x 1024 or if you're unable to go any higher then that, you could begin to increase settings from medium to high quality with AA and AF turned on.

You combine this option with the purchase of an Intel Core 2 Duo E6400 or E6300 and a cheap Intel 975X motherboard from DFI or Foxconn, you can have a fairly kick ass gaming rig without busting the bank.

Is the Radeon X1650PRO in Crossfire better then something like the GeForce 7600GT in SLI? Well, for our purposes here today it really doesn't matter as officially there is no option to have nVidia SLI on a 975X system. So if you don't want to go broke and want a mid-range dual graphics card setup this kind of combination is going to work pretty well.

What is interesting is the fact that the Radeon X1300XT cannot be found anywhere on the market. Using some price searching utilities, the X1300XT doesn't pop up anywhere and you can clearly see why. With performance being so close to what the X1650PRO is capable of, it would have to be priced quite similar. With a bit more searching and researching, a local supplier let us know what their cost price was on the X1300XT DDR2 and the X1650PRO - pricing differed by roughly 15%. Paying attention to the price difference on the DDR2 X1300XT and DDR3 X1650PRO (being very small) and with the X1300XT that utilizes DDR3 memory, it would almost be identical in price. It doesn't make a whole lot of sense for distributors, resellers and the public to buy the X1300XT and since we aren't really seeing them its obvious the distributors feel the same.

Both the Radeon X1300XT and X1650PRO offer great performance increases when paired up in Crossfire but as far as price is concerned in the Australian market, the ATI Radeon X1900GT would be a better buy coming in at the same price (sometimes even cheaper) as a pair of X1650PRO cards and doesn't require the extra work of setting up Crossfire.