In the last month, we reviewed both the 1950X and the 1920X, both high core count CPUs with a lot of power and threads to dominate any professional workload they might encounter. What made them extremely attractive were their price points, expansive IO, and platform. Well, today we meet the third Threadripper CPU, the 1900X, which is an 8-core 16-thread part. 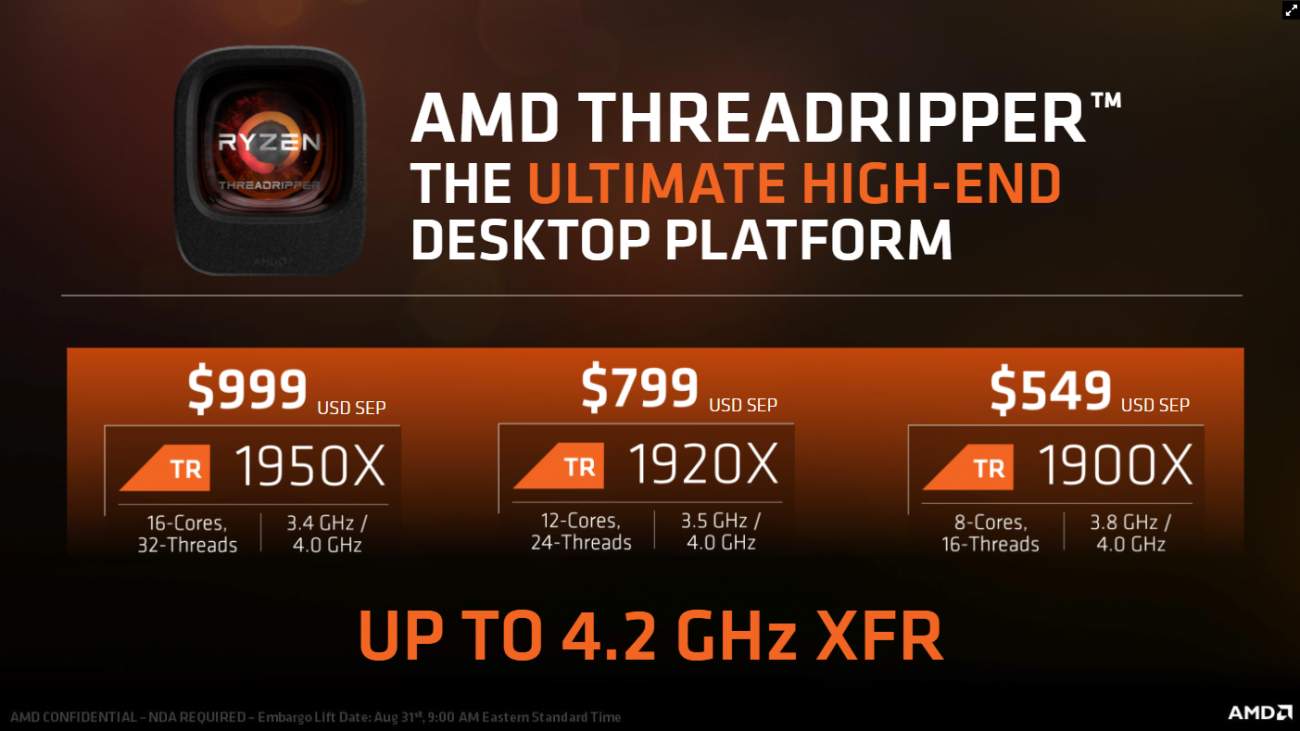 AMD's X399 platform has just become significantly more affordable. With confirmed pricing of $549 USD SEP (suggested price), the 1900X is slightly more expensive than the 1800X, which chimes in with 8-cores and 16 threads as well, but they are not the same CPU. The 1900X also offers a 4.2GHz XFR, which is the highest for an 8-core AMD part. The CPU offers a 3.8GHz base clock and up to 4.0GHz boost clock. 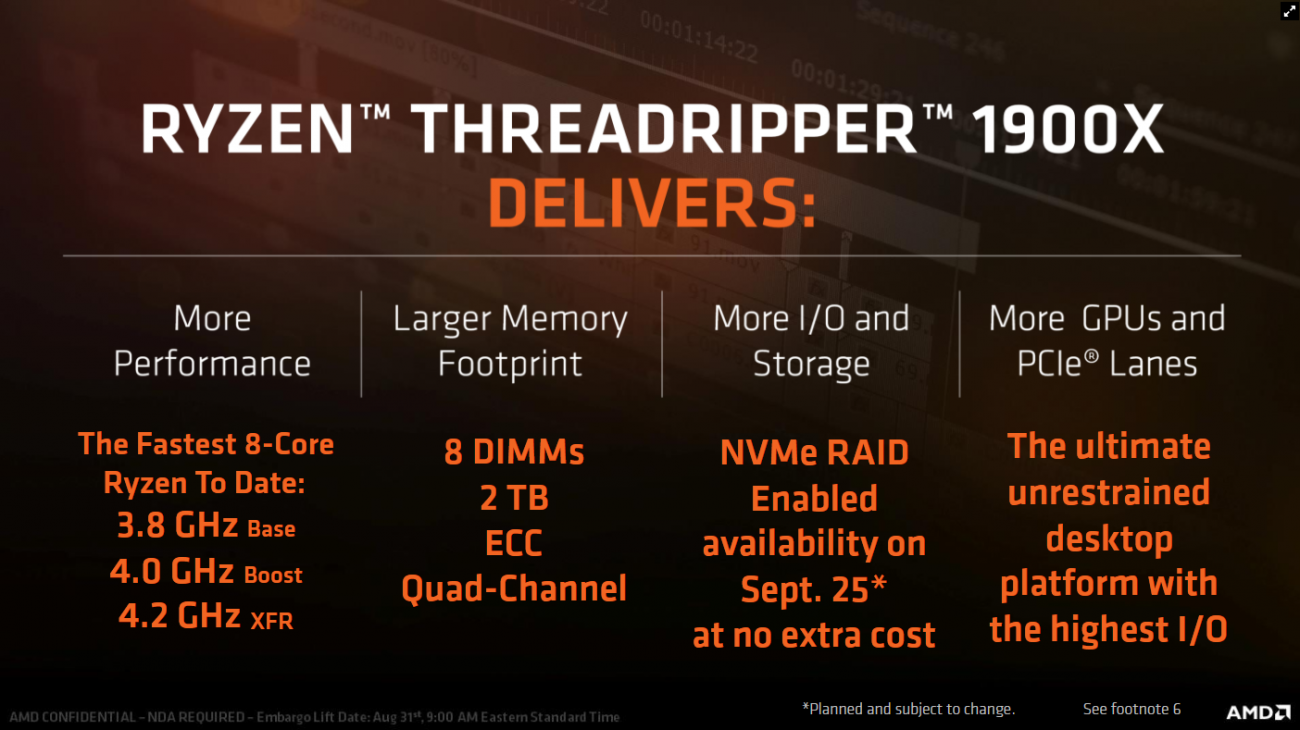 So, why should you get a 1900X over an 1800X? Granted, both have the same core and thread count, but the 1900X offers everything the 1950X and 1920X offer in regards to memory density, type, and channel support, IO, and storage support, and support for other platform devices such as GPUs. It's also an easy way for you to get into the X399 TR4 socket platform, and you can upgrade down the road if you feel there is a need for more cores and threads. 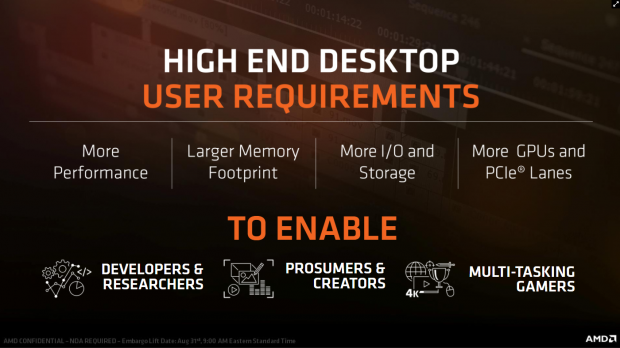 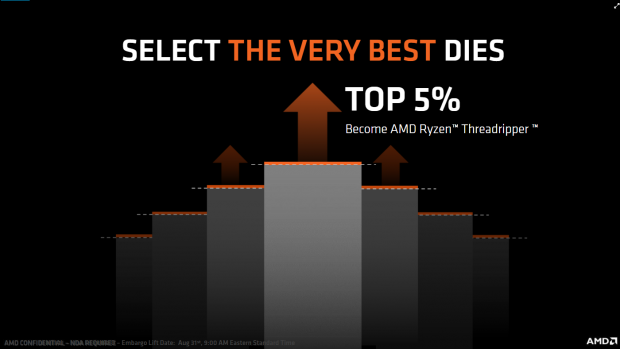 Platform matters when it comes to how much the CPU can be utilized. People who need all task crunching threads also require more memory, support for more devices, and more and faster storage. Threadripper supports many more GPUs, up to 512GB per channel of addressable memory space (for a total of 2TB), quad channel memory, and support for many more high-speed M.2 drive and, in the future, NVMe RAID. All Threadripper CPUs, including the 1900X, are from the top 5% of Ryzen dies, and the 1900X is no exception. Also, the 1900X is not identical to the 1800X when it comes to what's under the IHS. 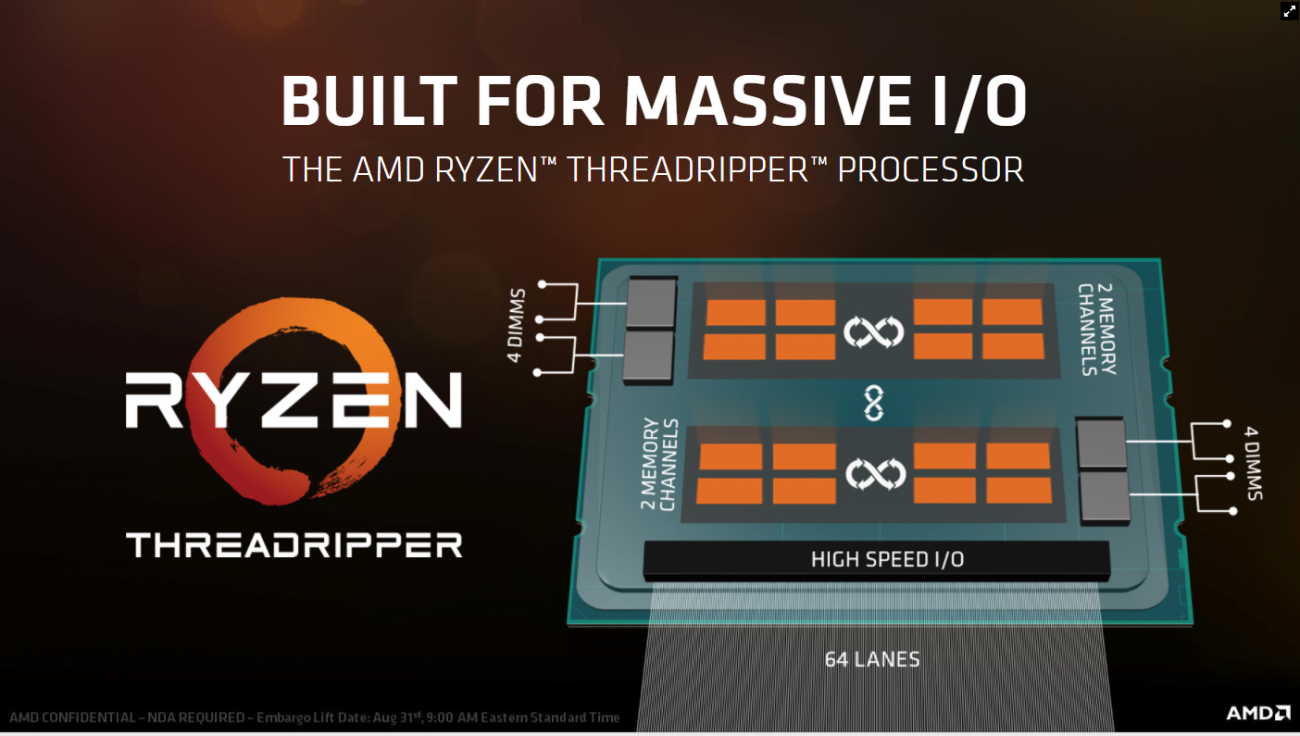 So, you are probably wondering, what does it look like under the die? Is it just one 4+4 die with three disabled? The answer is no; it's two-two Zepplin dies in a 4+0 and 4+0 configuration. So it's 4+0 ~~Infinity Fabric~~ 4+0, and that way you still get quad channel memory support and all the IO. Let's see what AMD says about its performance. 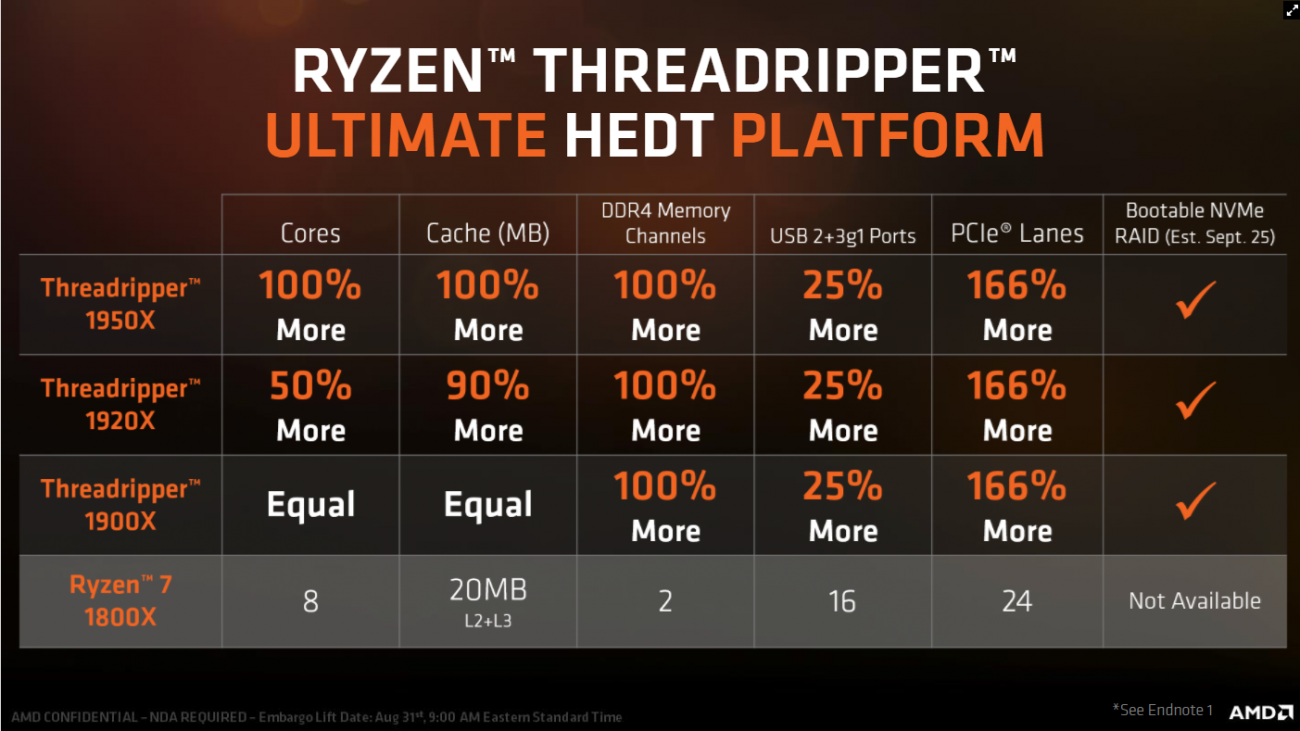 Threadripper embraces a significantly more loaded CPU and platform, and can easily be worth the premium for many. AMD did confirm that the AM4 platform will not be getting bootable NVMe RAID, and we will discuss the significance of this on the next page. 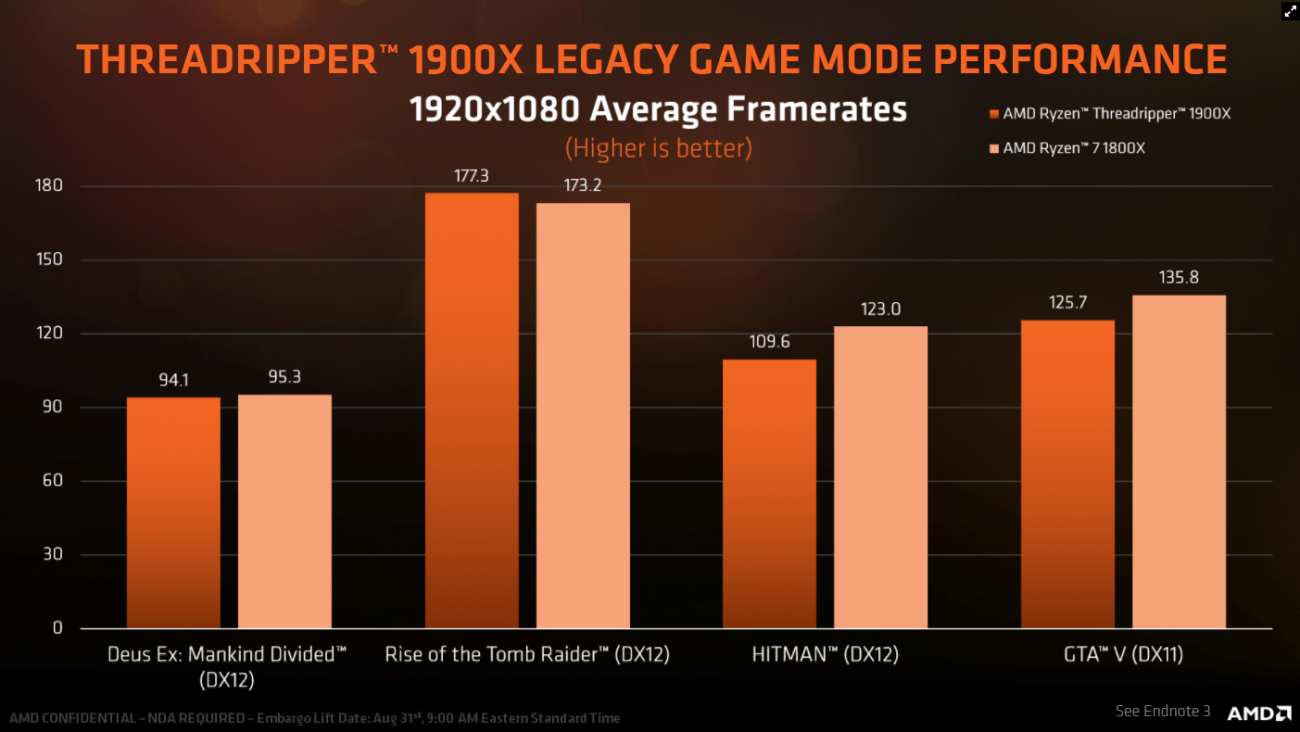 In legacy game mode, we see how the 1900X performs in games compared to the 1800X. The Legacy Game Mode basically puts memory into local mode, to try and level the playing field. We can see that the 1800X wins in many games, but in some games, the results are very close, such as in Deus Ex and Rise of the Tomb Raiser (where TR actually wins). I would say gaming performance between the two CPUs, in regards to noticeable FPS differences, might not be visible to the naked eye. 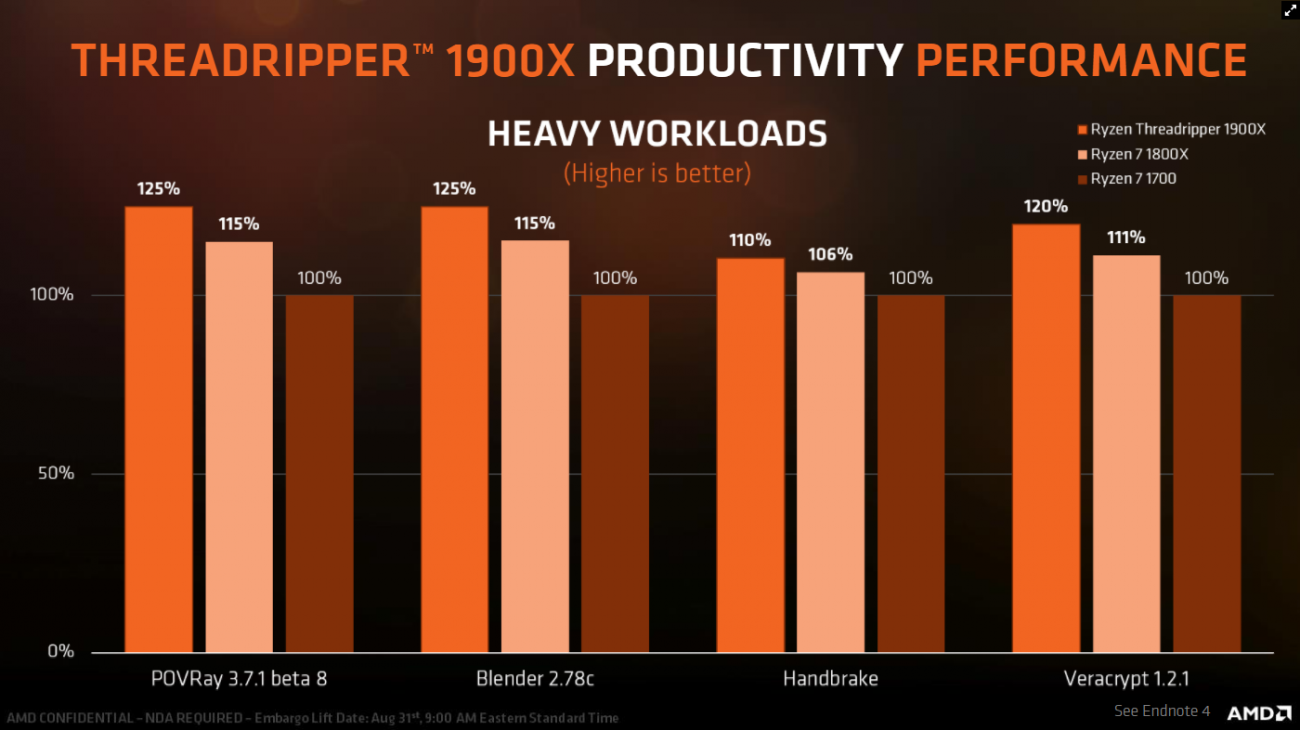 Back in normal operational mode (productivity mode), the 1900X is significantly better than the 1800X. The quad channel memory is mostly what we have to thank here (and some clock boost), and it gives us 10% more over the 1800X in POVRay, 10% more in Blender, 4% more in HandBrake, and 9% more in Veracrypt. Those are quite substantial gains, especially when the 1800X and 1900X operate with the same core count, thread count, and cache levels. 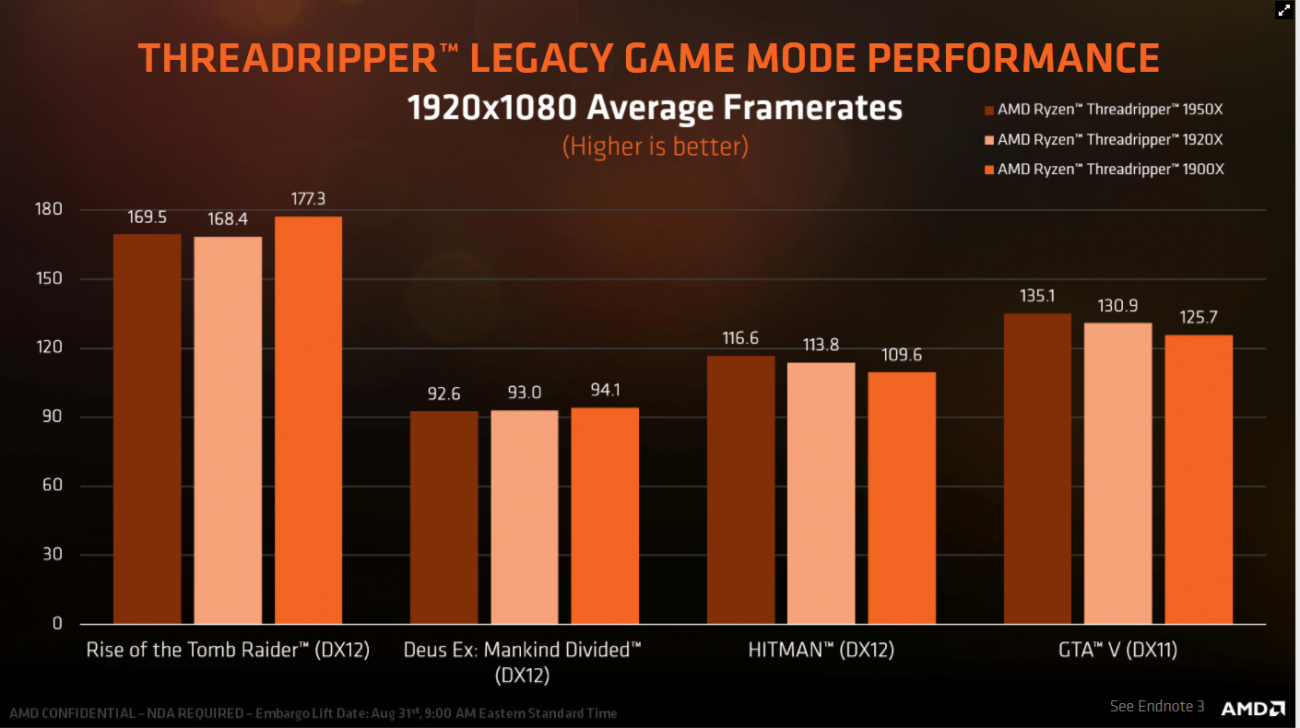 Back in Legacy Game Mode, we get to see the 1900X battle against the 1950X and the 1920X. The 1900X is actually faster than other Threadripper CPUs in Rise of the Tomb Raider and pretty much equal in Deus Ex, but it doesn't win in Hitman or GTA:V. Once again, we might be able to conclude it does decently in games, and it all depends on which game you are playing. Across the board, the FPS numbers for any of these four tests are high enough to play each game smoothly at 1080P with any of the three CPUs. 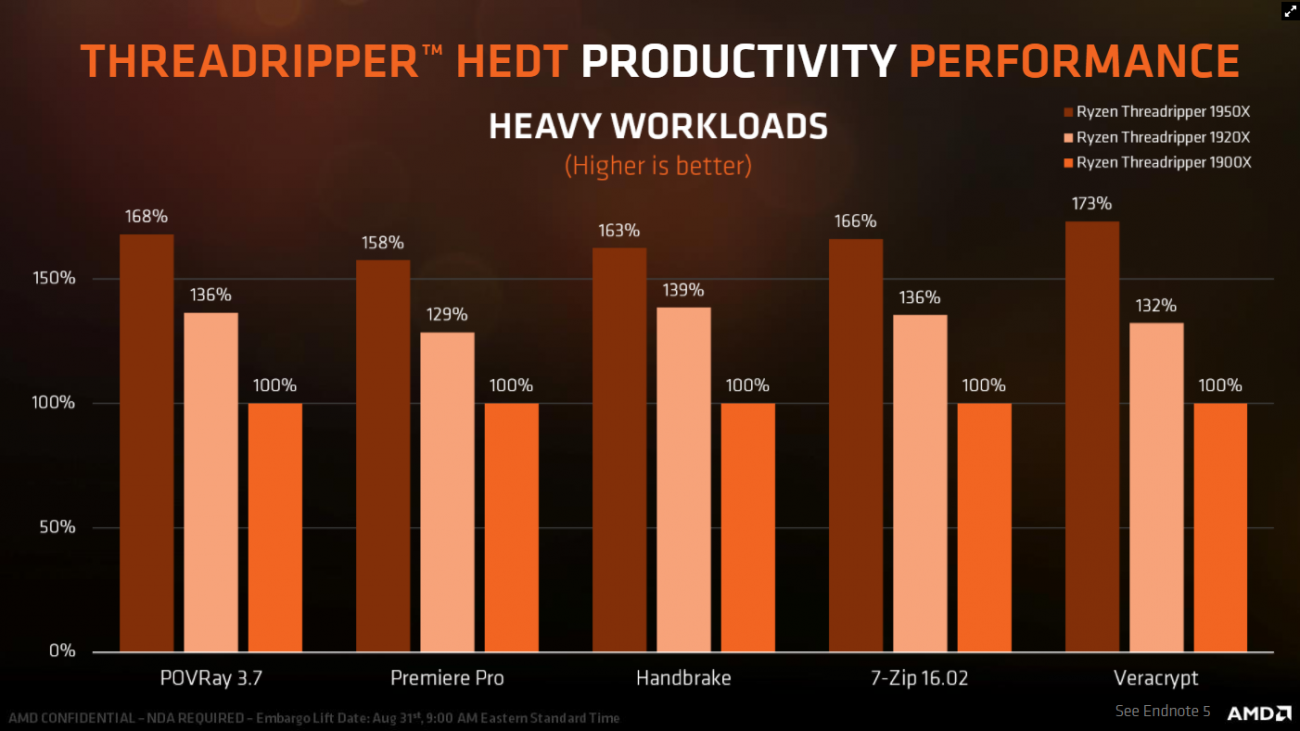 Here we see how the 1900X does in workloads, and it performs as we might expect. The extra 50% cores of the 1920X and 100% more cores of the 1950X offer them roughly 30% and 60% better productivity performance over the 1900X. However, those numbers might not be that drastic if you realize these are idealized scenarios, and the 1900X is probably good enough for many users.

However, value wise, would you spend almost double the price for 60-70% more productivity performance and roughly the same gaming performance? The answer to that question will decide if you go for the 1900X or the 1950X. For some, it's an easy yes, as performance rarely scales linearly, and for some, it's a no as 8 cores are more than enough. 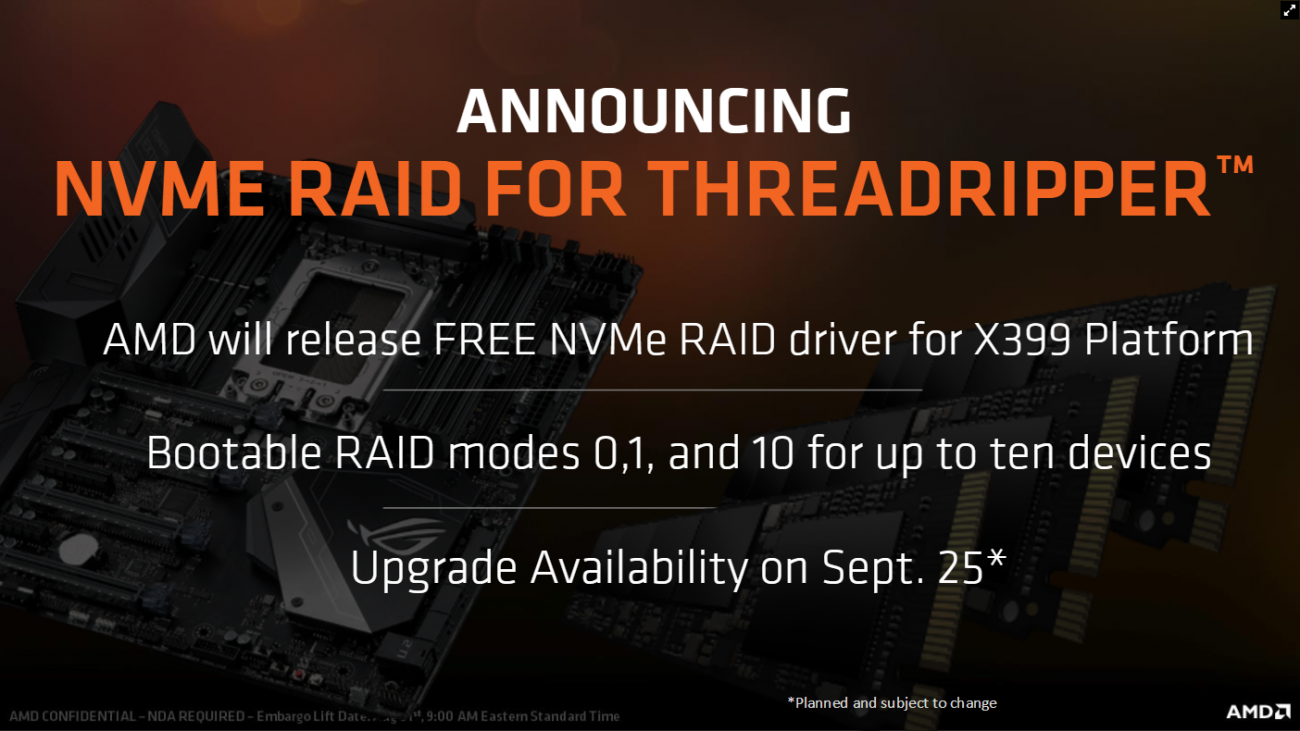 One of the things X399 lacked when compared to the competition was the ability to create bootable (hardware) NVMe RAID clusters with its M.2 slots. The competition had this in their chipset (where the M.2 drives mainly connect) and through their CPU through a virtual technology. However, AMD took swift action, and is now offering bootable NVMe RAID for the TR4 platform, with an estimated date of September 25th, 2017.

That means with a BIOS update, you can now RAID all three of those M.2 x4 32Gb/s slots connected to the CPU, for up to 9+ GB/s of raw speed or higher (theoretically). While AMD's competition offers RAID 0 free for all devices, RAID 1, 5, 10 and so on will cost money if the CPU is involved (from the chipset you still get those modes free), so AMD decided to offer RAID 0, 1, and 10 for free for all TR4/Threadripper customers. 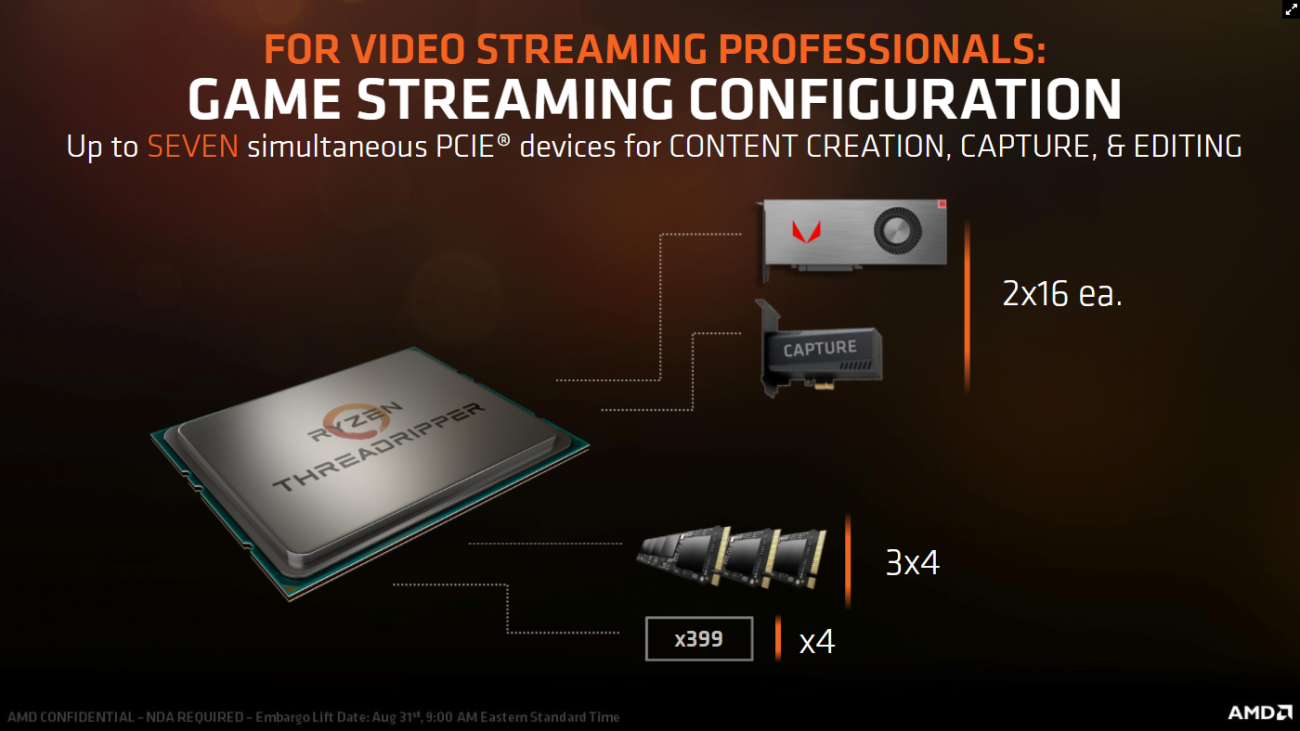 AMD has some suggested configurations, but the thing to notice here is that none of those configurations are even bringing into play the chipset's IO capabilities, meaning you can do even more. Everything is directly connected to the CPU, and that means there is no CPU to Chipset bottleneck.

AMD has a suggested Game Streaming Configuration, with a GPU running at x16 along with a dedicated capture card. Then you get three M.2 drives, perhaps those beautiful 960 Pros, and with RAID 0 those could be a huge 3TB cluster with 9GB/s sequential read times (theoretically). 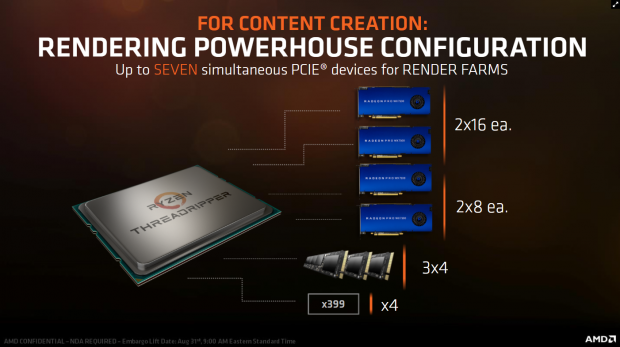 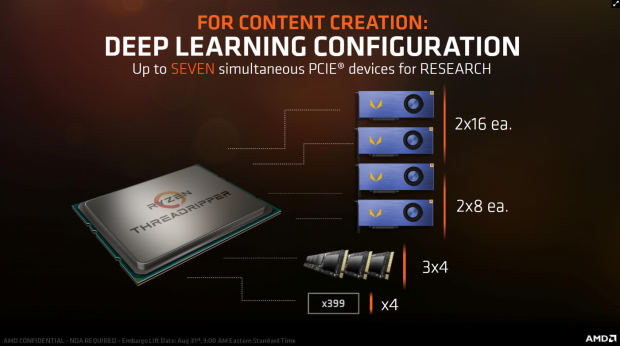 AMD has two very similar configurations; one called a Rendering Power House with four Radeon Pro WX 7100s pictured, along with the triple NVMe setup (RAID 10 perhaps?). The setup for rendering is what many professionals would use for producing movies and content creation.

On the second slide, we see AMD's configuration for a Deep Learning box, and the only difference is that the WX 7100s were swapped out for four Radeon Vega FE GPUs. AMD is trying to get across that you can load up seven devices, and these devices can be the best on the market, and all can be unleashed to their full potential. Now with NVMe bootable RAID, that is true. 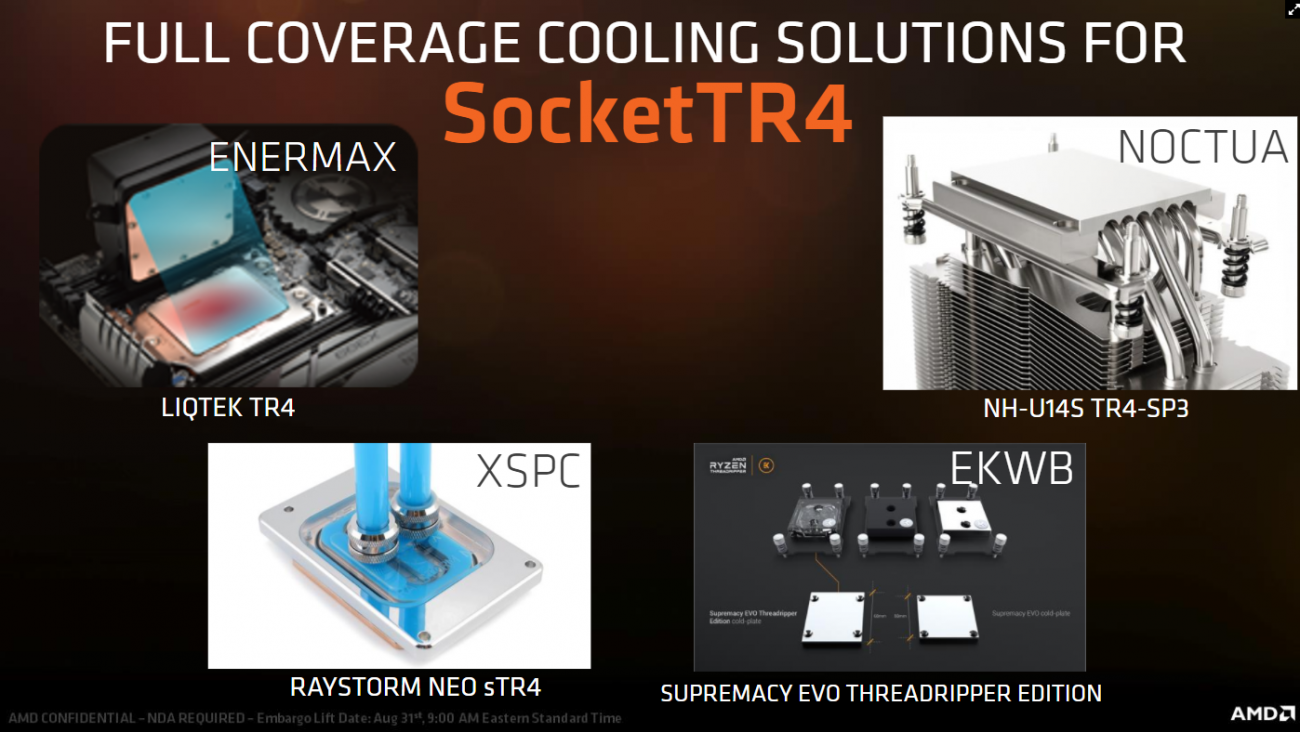 AMD also wanted us to know that they have been working with vendors for full coverage blocks and AIOs. I have Enermax's Liqtek TR4 360mm AIO already, and I think another editor here has EKWB's full coverage block. Noctua also has coolers coming, and XSPC has a very pretty block coming with built in RGB LEDs. 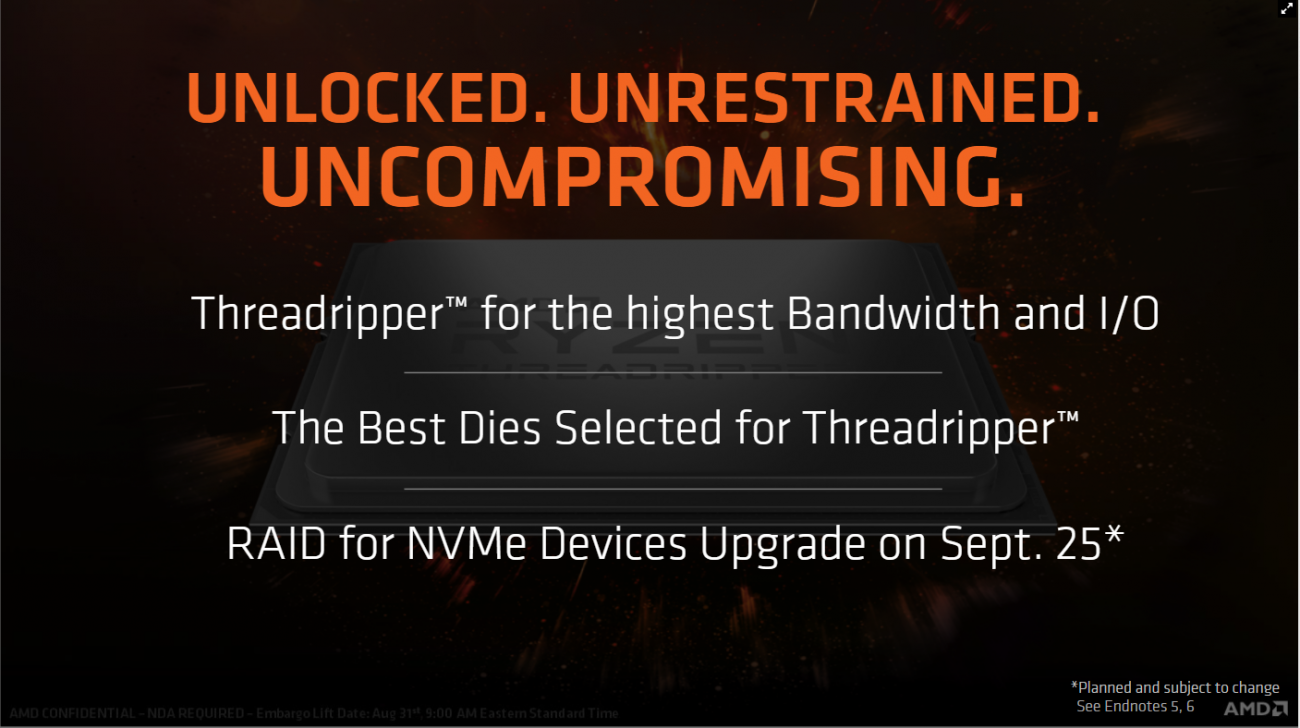 AMD will bring NVMe RAID to the TR4 platform on September 25th (that is if everything goes accordingly with the BIOS), and then TR4 will have another advantage to tote. The lack of NVMe RAID was a huge issue, and while gamers might care about it, TR4 isn't a gamer's platform, it's a professional's platform that can also game. Professionals require RAID, and not only to improve performance, and with Threadripper's high PCI-E lane count, it just makes sense for AMD to add in bootable NVMe RAID.

Hopefully, we will get our hands-on a 1900X sample and tell you how it does, but until then you have AMD's in-house numbers.