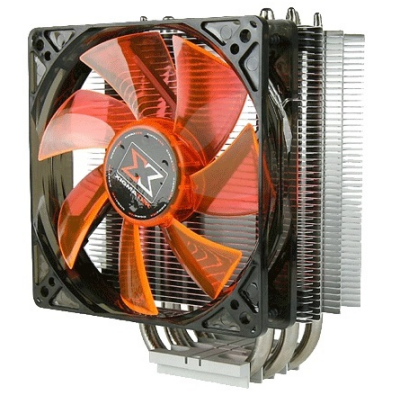 As promised, here is the last installment of my three part mini-series of Xigmatek product reviews. The previous two were some of the newer releases from Xigmatek, while this one is a trusted cooler that has made its place on most retail shelves a while back. While the sample is a little late in getting reviewed, we do try to give every cooler their day in the sun.

Part three consists of the Xigmatek Achilles S1284C CPU cooler and the optional Crossbow ACK-I7363. The Achilles is an advance of the S1284EE, an already proven design. The main two differences of the Achilles are the nickel plating on the heat-pipes and the orange bladed, white LED fan, both of which add a bit of "flash" to the basic design. With the addition of the Crossbow kit this cooler is now i7 compatible as well, opening Xigmatek up for a bigger market of use. The previously mentioned fan is a 61 CFM version identical to the fan that comes with the Red Scorpion, but this time it cools a four heat-pipe version instead of the RS's three heat-pipe configuration.

With the Achilles S1284C being an upgrade to the basic, four-pipe version of the S1284, one would only assume it should do pretty well at cooling your CPU. With the lower CFM fan being included in this kit, I don't expect any miracles, nor do I expect it to be as good as either of the two I have recently reviewed for Xigmatek in the past few weeks. Time to stop all the chatter and get down to what this cooler has to offer. 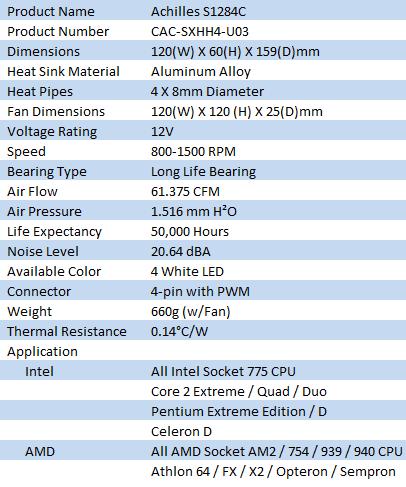 The Achilles S1284C is a fifty-four, aluminum finned cooler that surrounds four staggered, nickel plated heat-pipes that are held together with the aluminum base plate. This H.D.T. cooler has exposed copper on the contact area for better heat transfer, while the plating keeps the pipes from oxidizing. The Achilles is supplied with a 61.375 maximum CFM fan that can run as high as 1500 RPM. Xigmatek rates this fan to only sound off to the 20 dBA level, which is really quiet.

Again, as with the previous coolers I had searched for from Xigmatek, the Achilles seems to be an elusive cooler to locate. While it is available for purchase from a few e-tailers, stock at major e-tailers is virtually nonexistent. I realize this cooler isn't exactly the newest cooler to hit the shelves, but I was surprised to see such limited stock across the board.

I tried searching Newegg for even a deactivated or out of stock listing, but it was all to no avail, as they don't show any listing for the Achilles at all. I was, however, able to locate the cooler in the $39.99 - $42.99 U.S dollar range searching through Google. The optional Crossbow mounting kit was a bit easier to locate and I did in fact find these available at Newegg for 9.99 U.S. Dollars, plus shipping of course. This kit is not only to more securely mount the Achilles to the LGA775, but with a bit of rearranging it will mount up to a LGA1366 motherboard as well. 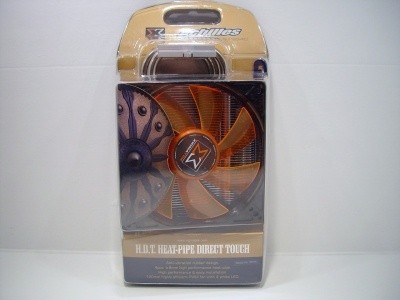 Xigmatek ships the Achilles S1284C in an all-plastic outer package with highly decorated, gold coloured inserts to show off their product. The Achilles is shipped upside down and half covered by a shield, but the buyer has a good look at the H.D.T. base. 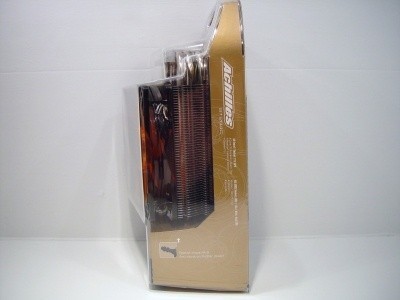 Spinning the package to the right, you can read the applications that are possible. At the very bottom is an image of their very user-friendly, anti-vibration, rubber fan mounts. 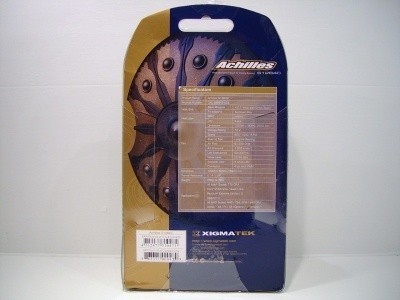 The back of the Achilles packaging is cardboard and this is where all the tabs from the plastic front are held into place. Xigmatek used this real estate to display the specifications over a full image of the shield from the front of the package. 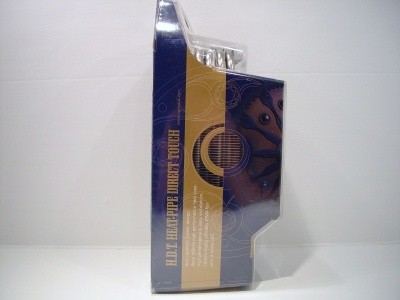 The left side of the Achilles wrapping is what looks to be a bejeweled shield with a cut-away window to allow you to see the fins of the Achilles. Xigmatek lists five key features of the Achilles to the bottom and also includes their web address for easy reference. 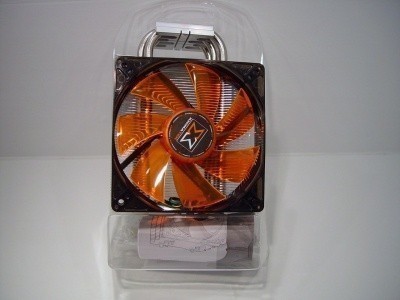 With all of the outer packaging removed, you can see that this cooler fits snugly inside. And with the additional box for hardware at the bottom, it allows a bit of room to absorb any shipping mishaps. 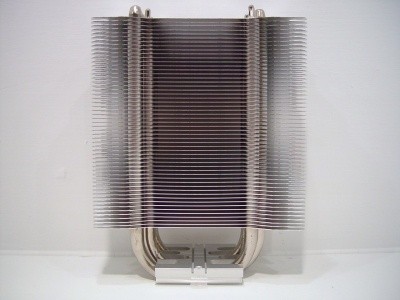 Here we get a good frontal view of the Achilles. From the bottom, you can see the aluminium base that surrounds and holds the four, 8mm, nickel plated heat-pipes. These heat-pipes take the heat to fifty-four fins to await the removal from the airflow created by the fan. 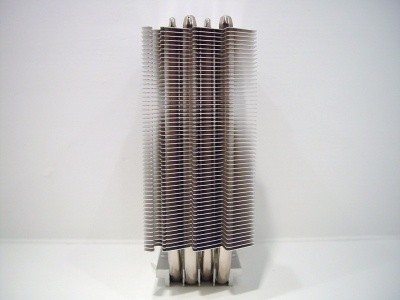 Looking at the Achilles from the side, you can start to see the fin edge design. You can also get a better look at the nickel plated heat-pipes and how they travel through the cooler. 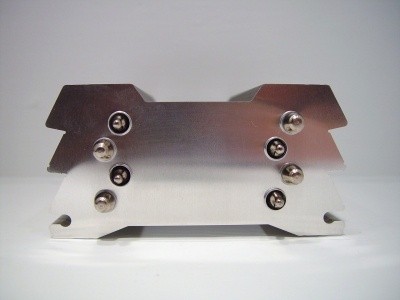 The top view of the Achilles shows the design of the fins really clearly. As with almost all of Xigmatek's tower coolers, these nickel plated heat-pipes protrude the top fin as well. On the bottom left and right are the anti-vibration fan mounting grooves we are accustomed to seeing on a Xigmatek cooler. 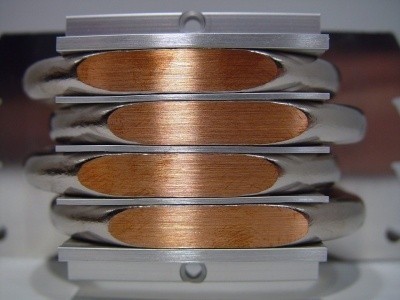 The H.D.T. technology that Xigmatek is so proud of is shown here. The milling process was done after the 8mm pipes were plated in this instance, exposing the copper cores. This base is overall flat and level, but the gaps in this version do tend to absorb a bit more thermal compound than most if you use a blob of TIM and allow the cooler to do the spreading. It's recommended that a thin layer is applied to both the CPU and the Achilles. 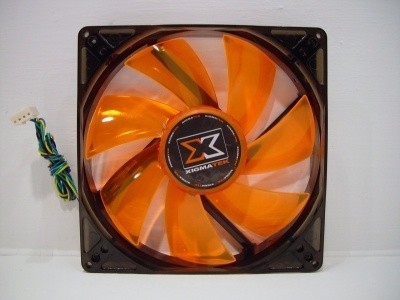 This is a close up look at the 120mm fan that is included with the Achilles. Judging by the fan specs of 61 CFM, along with the rest, I have to assume this is the same fan that comes with the Red Scorpion S1283. This orange bladed, white LED fan is an attractive addition to both coolers, though. On the very left side you can see that this fan is powered by a 4-pin, PWM controlled fan connector. 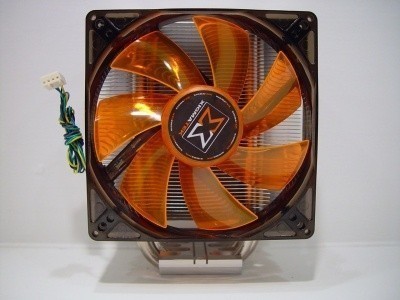 This is a good view of the coverage of the fins that Xigmatek coolers provide. By maximizing the amount of exposed fins to the fan, it greatly enhances the cooling performance. 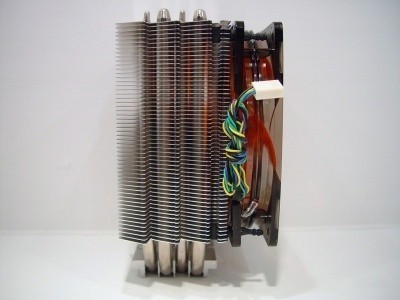 The last view of the cooler completed before I start my testing. Once again, you can see how well the fan covers from top to bottom. The anti-vibration fan mounts are easily installed and hold the fan securely and quietly. 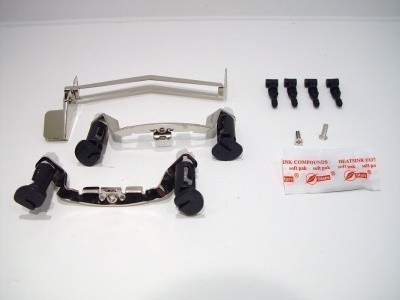 The accessories that Xigmatek ships with the Achilles are the basic AMD lock-down bracket and the LGA775 push-pin mounting brackets. They also include four, anti-vibration fan mounts and two Phillips head screws for mounting the LGA775 brackets. Lastly, they include a tear open packet of thermal compound. 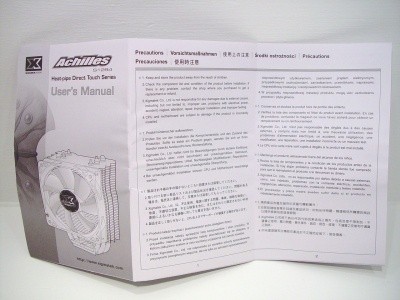 The manual is very easy to follow for either of your mounting options and Xigmatek writes these instructions in seven languages. 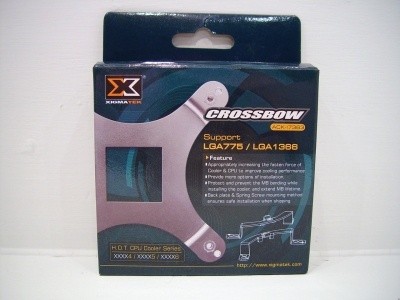 Here we have the optional Crossbow ACK-I7363. This mounting system is a bolt-through mounting kit that is compatible for both LGA775 and LGA1366. Notice the series that this bracket supports at the bottom left. Be sure you order the correct version, as there are other versions and they do not fit correctly. 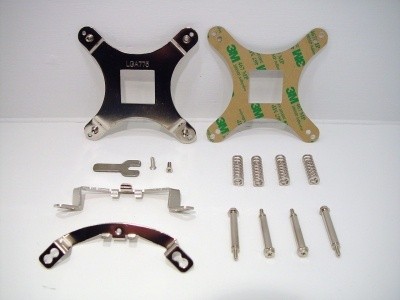 This Crossbow kit contains the following parts. An LGA775 and LGA1366 back plate with 3M isolation stickers to keep any grounding issues from arising. Below that is a supplied wrench for making sure the mounting screws are secure. Two Phillips head screws to mount the brackets to the base of the Achilles, and of course the brackets. To the right side are the actual mounting bolts to secure the brackets and back plate to the motherboard along with the tensioning springs, which can be easily slid over the mounting bolts.

The Xigmatek Achilles S1284C performs right about where I expected it to in the trio of testing I have recently done for Xigmatek. While falling behind the Thor's Hammer by about 2 at idle and 3 at load from the two fan results previously posted, for this solution which only offers a single fan cooling configuration, I think it shows an admirable performance.

While the Achilles isn't going to set any records with the low amount of noise that emanates from this cooler at full speed, 53dB is nothing to scoff at. I feel Xigmatek did a nice job of mating flash and function with the Achilles overall.

While I realize the Achilles is not the flagship model for Xigmatek, it may very well have never been Xigmatek's intentions. It just seems a bit odd that Xigmatek opted for form over function with this cooler. With all the fan choices they have on hand, they opt to limit their coolers performance levels with the use of the 61CFM fans. I don't think that the four heat-pipe configuration is enough of a subtlety to offset the use of such a fan.

The overall performance isn't bad by any means, especially as it compares to the rest of the lineup, but by far isn't the best "bang for the buck" cooler on store shelves. With retail pricing in the $40 range, plus the addition of the Crossbow at another $10, this brings it to a $50 cooler. Even within Xigmatek's own product line-up I feel your money can be better spent.

There is one other issue I wish to address which may lend a little more to the coolers overall performance and that is the four heat-pipe design in general. The stager of the pipes in the base makes it so not the complete contact area makes contact with the HIS, diminishing its effectiveness ever so slightly. On the same train of thought, the pipes are actually too wide for the IHS as well, only utilizing half of the outer two heat-pipes. I am not the first to bring up these points about this cooler, nor I am sure I will be the last. In defense of Xigmatek, though, they have heard these complaints and have not engineered any overall design changes with the four heat-pipe coolers, so they must feel they are on a winning solution. 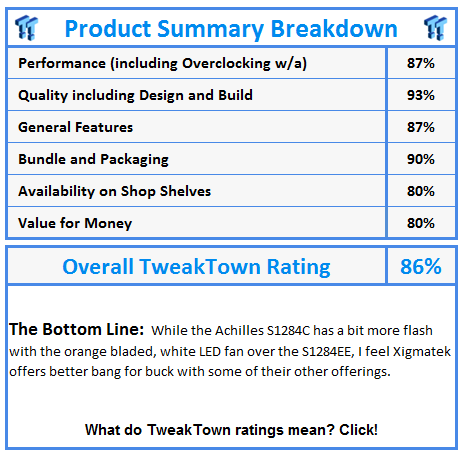