The Average Selling Price (ASP) of Ultrabooks and tablets declined by 7.8% in 2014, as the market matured and commoditized, allowing these devices to become more affordable in all markets. According to market intelligence firm ABI Research, the average weeks of household income needed to buy a tablet or Ultrabook both declined by approximately 30% YoY; making these devices more affordable to a wider range of consumers. 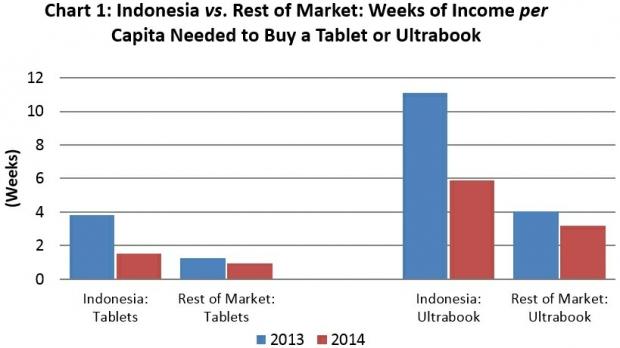 "Across 22 different countries between 2013 and 2014, there was an 8.5% decline for the ASP of tablets and 7.1% for Ultrabooks," says Research Analyst Stephanie Van Vactor. "This decline is allowing these devices to reach a larger audience in a wider range of countries." Although growth is slowing for both these types of devices, affordability could help prevent a drastic decline in sales.

As shown in Chart 1, the most noticeable change in affordability for weeks to buy for Ultrabooks and tablets occurred in Indonesia. In 2013, ABI Research's data shows that 11 weeks of income were needed to purchase an Ultrabook and nearly four weeks for tablets. In 2014, the weeks of income needed to purchase an Ultrabook declined by 47%, dropping to 5.9 weeks, and for tablets weeks of income declined by 60%, dropping to 1.5 weeks. "Partly due to the increase in models and price points in e-commerce, Indonesia, like many other developing markets, is a good example of the commoditizing of these devices," continues Van Vactor. "Market maturation will continue this effect through the next year, especially as competition increases and affordability continues to prosper as a result." Over the next year, competition will continue to surge and ASPs will continue to decline.