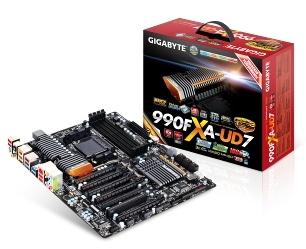 "GIGABYTE is thrilled at the opportunity to bring to market an entirely new series of high-performance AMD motherboards that will excite enthusiast PC gamers everywhere," commented Richard Chen, VP of Worldwide Sales and Marketing at GIGABYTE. "We've pulled out all the stops to make these boards the ultimate PC gaming platform with the inclusion of 4-way SLI and CrossFireX graphics technologies for the very first time on an ATX form factor AMD motherboard."

Packing up to 42 PCI Express gen 2.0 lanes, AMD 900 series chipsets are also the first to support both 4-way AMD CrossFireX and NVIDIA SLI modes, pushing the boundaries of 3D gaming performance. This means that GIGABYTE 900 series motherboards deliver the latest gaming titles at the highest possible frame rates and screen resolutions with support for the latest multi-display configurations including AMD Eyefinity and NVIDIA 3D VISION™.

GIGABYTE Ultra Durable™ 3 design features 2 ounces of copper for both the Power and Ground layers which dramatically lowers system temperature by delivering a more efficient spreading of heat from critical areas of the motherboard such as the CPU power zone throughout the entire PCB. GIGABYTE's Ultra Durable™ 3 also lowers the PCB impedance by 50%, which helps to reduce electrical waste and further lowers component temperatures. A 2oz Copper layer design also provides improved signal quality and lower EMI (Electromagnetic Interference), providing better system stability and allowing for greater margins for overclocking.

*Features may vary by model. Please refer to GIGABYTE website for details.