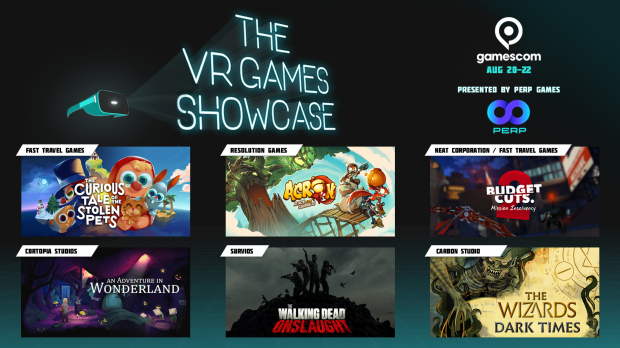 Participating companies & games in 'The VR Games Showcase' at Gamescom are:

You can download a full presentation of 'The VR Games Showcase' here.

Information and assets for each of the participating studios can be downloaded here.

Andreas Juliusson, Marketing & Communications Manager for Fast Travel Games, explains how this initiative came to life: "'The VR Games Showcase' is a concept I came up with 6 months ago. The VR industry is still young and most active VR game studios are relatively small, like us, with the same kind of marketing challenges and lack of resources. However, if multiple studios would join forces to share costs and efforts, I believed we would be able to deliver a real heavyweight event concept with clear value for both media and content creators to attend!" Andreas elaborates: "As I started to reach out about this initiative, I was met with a massive interest not only from the studios but also from Perp Games, whose investment helped bring it to life. Now, the biggest studio event collaboration in the VR games industry is finally happening, with the premiere taking place at Gamescom this summer! I am hoping we can keep building on this concept and allow 'The VR Games Showcase' to grow going forward. This unique collaboration really raises the bar for VR games marketing and event presence."

'The VR Games Showcase' is presented by global games publisher Perp Games. Perp Games is a market leader in VR publishing and proud to support such innovative concepts. Perp Games MD, Rob Edwards added, "We truly believe VR offers players a unique gameplay experience and 'The VR Games Showcase' is a great way to allow gamers to experience hands-on, some of the most exceptional VR games being developed.". Read more about Perp Games on the official website.

If you are a media outlet or a content creator interested in attending 'The VR Games Showcase' at Gamescom on August 20-22, please reach out using the contact email listed below.