Malaga, ES, 16 May 2019 - Reventure, with an innovative approach on nonlinear mechanics and loads of humor is set to leave Early Access on June 4th after one year of polishing and periodic updates. The game will be available on Steam for $5.99. 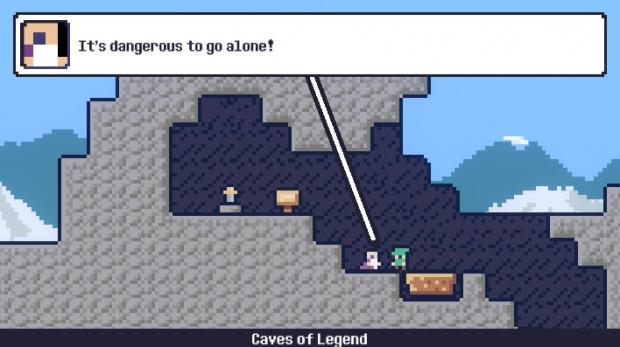 Reventure could be described as a "choose your own adventure" book in the shape of a 2D platformer.

It starts out from the classic monomyth premise: "You are a hero, the princess is in danger, go rescue her!" but it quickly gets more complicated than that - until it completely diverges into something completely non-standard.

The gameplay takes place in short-lived runs. You start with a clear goal in mind, but the game throws at you some button, trap, treasure or enemy that will make you deviate from your path into a completely new situation. You'll also discover something new on the process and end up your story with a feeling of "What if I had done THAT instead?".

That feeling will drive your next goal, closing the loop over and over and wrapping up a surprisingly addictive loop.

On the first runs, the game is all about exploration. When you start knowing your whereabouts, it smoothly transitions into a completionist experience, where you want to achieve every possible ending. As you approach the late game it transforms once again, this time into a puzzle platformer where you have to carefully plan your journey in order to discover the more exotic endings.

"Great game. Think Stanley's Parable and Undertale meets side-scrolling adventure. This game will make you smile while you're playing it, more than once. Cheeky sense of humor."

"...I was expecting a "silly" game, just a funny parody. But, the game is so much more than that: It has its own identity, not only is the great sense of humor, but also the excellent mechanics and gameplay. You can notice how everything is done with a lot of thought and care..."

"I had a blast exploring and figuring out this game. as of now I've only got a little over half the endings. There's still so much to do! If you like exploring and laughs, you can't go wrong here."

"I've barely scratched the surface on this hidden gem, and every "ending" I've seen has put a smile on my face. Don't let the visuals and controls fool you, it's impressive how much thought was put into this game, HIGHLY recommend!!!"

"Don't be fooled by this game. Externally is dressed as a parody but at his core is a choose your own adventure game with a lot of well written humor. When you start uncovering the myriad of different endings that the developers has hidden in the game you see the incredible amount of work and love that have been put into it. The game encourages you to experiment and try different approaches to uncover his secrets, giving you that aha! moment followed by a laugh when you see the results."