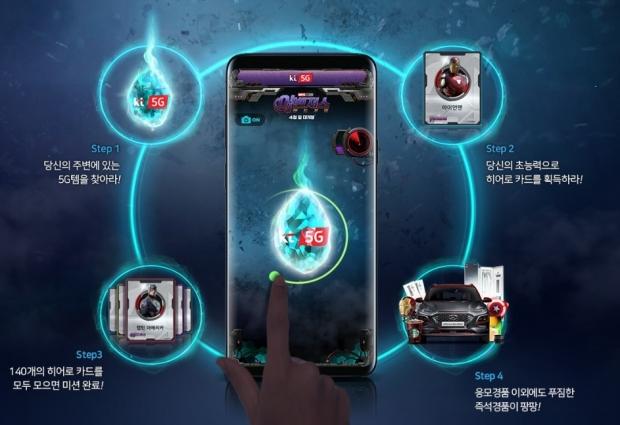 KT held a five-week, 5G promotional event - an AR game where players search for cards with characters from the "Avengers: Endgame" movie - from April 5. Anyone could play the game by downloading the app, dubbed "Catch Heroes" on the Google Play Store (Android) and the Apple App Store (iOS), or using the QR code from the event notice at KT stores across the country.

"Our Avengers AR event is the latest effort to offer a fun experience on our new 5G network," said Kim Weon-Kyung, KT's Executive Vice President in charge of the GiGA Service Unit, part of the company's Marketing Group. "We will continue to do our best to show what 5G can do in the new era of super-fast and ultra-reliable connectivity."

The special event, jointly conducted with Walt Disney Company Korea, was designed so that participants would help draw a digital map of the areas covered by KT's newly launched 5G network. KT's nationwide 5G service covers the country's most-populated areas, including the capital Seoul and its surrounding metropolitan area, six other metropolitan cities, most of all 85 major cities, 70 large shopping malls and discount stores and 464 college campuses.

In KT's Pokemon Go-style AR game, players collected hero cards by spotting icons resembling Marvel's Infinity Stones on their devices, The mission was accomplished by collecting 140 types of hero cards to complete the card book. Participants who completed the mission were eligible for giveaways.

Hero cards corresponded to lead characters from "Avengers: Endgame," including Iron Man, Captain Marvel and Thor, as well as the villain Thanos. The cards were hidden in different areas. Only 40 types of cards could be found in areas covered by 5G, helping to confirm the scope of the new technology's availability. When the hero cards were found, they were marked on the "5G Coverage Map" on KT's homepage.

KT, Korea's largest 5G service provider, gave an advantage to its 5G subscribers by letting them find hero cards in 5G-covered areas more easily, so that they could complete their card books quicker and win special prizes.

A total of 50,000 prizes were given away. Prizes included the limited Iron Man edition of Hyundai's subcompact SUV Kona, travel tickets to Hong Kong Disneyland, the Samsung Galaxy S10 5G, the LG Tromm Styler and the Marvel Bodyfriend Hugchair. The first 1,000 who accomplished the mission were given two tickets each for "Avengers: Endgame," and players who found bonus cards received a variety of prizes, including Starbucks Coffee coupons.

KT is the first local carrier providing updated 5G coverage information to the public by offering a visualized map (https://coverage.kt.com) on its corporate website, documenting its 5G-serviced areas across the country, updated regularly by cities and districts.

The Korean telecom leader has also exclusively built its next-generation wireless network to cover the country's key transportation routes and plans to expand the coverage to subways and key sites such as public offices and university hospitals.

KT Corporation, Korea's largest telecommunications service provider reestablished in 1981 under the Telecommunications Business Act, is leading the era of innovations in the world's most connected country. The company leads the 4th industrial revolution with high speed wire/wireless network and new ICT technology. KT launched the world's first nationwide commercial 5G network on April 3, 2019, after successfully showcasing the world's first trial 5G services at the PyeongChang Winter Olympic Games in February 2018. This is another milestone in KT's continuous efforts to deliver essential products and services as it aspires to be the No.1 ICT Company and People's Company.