MONTREAL - April 24, 2019 - The physics-based (and often hilarious) competitive multiplayer game Save Your Nuts is launching today on Steam Early Access! Grab a few of your closest friends - and a frenemy or two - and get ready for aggressive soccer-inspired action unlike anything you have played before. 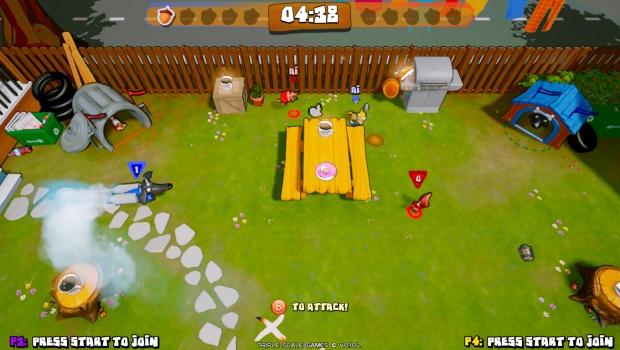 Developed by French-Canadian studio Triple Scale Games, Save Your Nuts is an impossibly silly and endlessly enjoyable multiplayer game for up to 8 players on the same screen, online, or against the computer. No players around? No problem! Save Your Nuts also includes robust AI-controlled opponents and online multiplayer. A thinly disguised "forest sport" featuring intense gameplay, interactive levels and an assortment of crazy animals, Save Your Nuts is certain to leave a lasting memory on participants - whether they win or lose!

Can you handle in-your-face, physics-driven soccer confrontations with over eager squirrels, crafty felines, rowdy raccoons, armored armadillos, and clueless doggos? Are you ready to make daring plays alongside your teammates, grab food power-ups, and tackle your opponents to steal their nuts right from under them? If so, Save Your Nuts is the multiplayer game for you. Even novices can jump in and do some damage - er ... score some points - thanks to intuitive controls, a gradual learning curve, and solid controller support.

Collect nuts one by one before time's up. You have only 5 minutes to collect 5 nuts. Once the buzzer sounds, the team with the most nuts wins the match. If the score is tied, the game goes into overtime!

Steal nuts from the other team's safe house and fight for more than one nut at a time. Do you love chaos? Because chaos is what you get with this gameplay mode.

Take out the opposition and be the last one standing to win.

"Living in Montreal, I often see dogs running after squirrels in parks. It's always fun to watch the action because dogs can basically never catch the squirrels, which just love to taunt the poor dogs!" says Frederic Bohn, founder and programmer at Triple Scale Games. "After five years working on AAA games as a programmer, I started having more fun working on personal Unreal Engine projects such as Save Your Nuts - inspired by the squirrels in the park - than on my day job's high-profile titles. I was bitten by the indie development bug ... and I've never looked back."

Players can also buy the game directly from the developer's website: http://triplescalegames.com