It hasn't been too long since we had our AMD Radeon R9 290X and Radeon R9 295X2 in the benchmarking ring, taking swings at each other in the battle of 4K dominance. The dual GPU card came out on top of course, but that wasn't the point, as we knew the R9 295X2 would dominate. What we're here to do, is just see how these two cards are doing with the latest drivers, at 4K, after all this time. 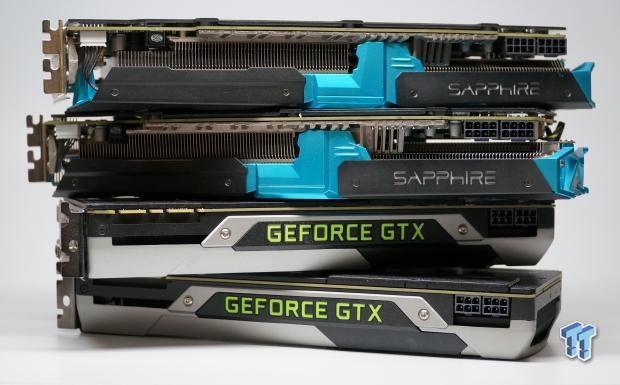 Well, here we are again but now we have two NVIDIA GeForce GTX 980 cards against two of SAPPHIRE's Radeon R9 290X Vapor-X 8GB cards, yeah - those 8GB cards that we all know and love. The two NVIDIA GeForce GTX 980s have 4GB of VRAM, while the SAPPHIRE Radeon R9 290X Vapor-X cards have 8GB of VRAM. At 4K, VRAM usage is up much more than most other resolutions.

Just how much of a performance difference can we expect from the amazing architecture that is Maxwell, versus the 8GB of VRAM on these two SAPPHIRE cards? Let's see, shall we?

For this test, we're running:

For GRID Autosport, it has a lock at 60FPS so we cranked up the visual settings to 8x MSAA to try and squeeze the life out of the game, even with our GTX 980 SLI and R9 290X 8GB CF setup. Most of the other games we usually run at Medium presets for our actual video card reviews, but we're pushing these things to the wall for Tweakipedia. We want to see them cry, right?

Our real-time benchmark in Battlefield 4 has us playing a 5-minute round of BF4 in a 64-player environment on Paracel Storm. We play the actual game, while trying to keep our gameplay the same. This means spending limited time inside of buildings, getting into vehicles and helicopters for 30 seconds or so if the situation is there. You'd think that the frame rates and tests would vary, but after repeated tests, they aren't that far out from each other. It's also a much more realistic look at real-world numbers than running around on a pre-determined path in single player.

Let's start off with 3DMark Fire Strike Ultra, at 4K. 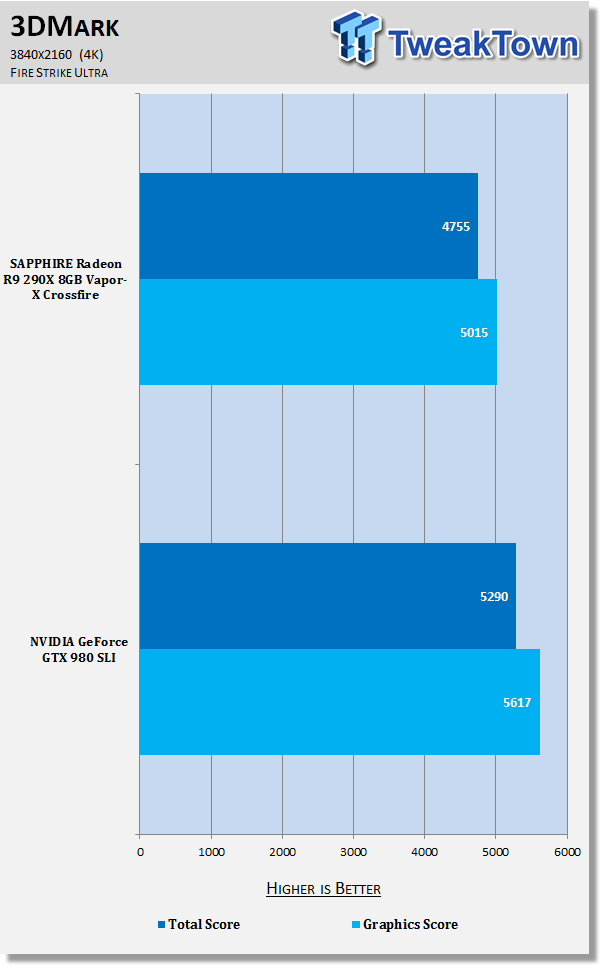 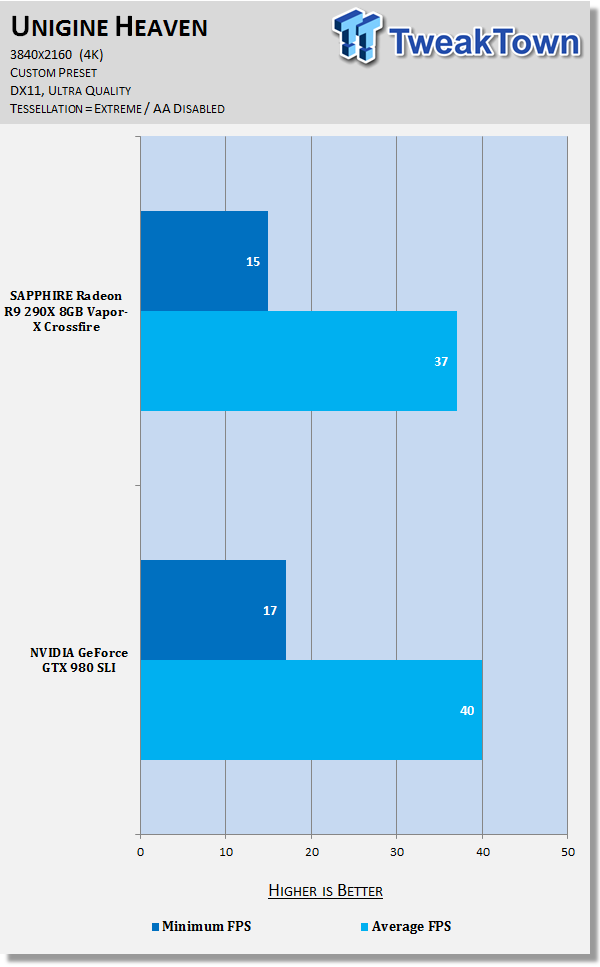 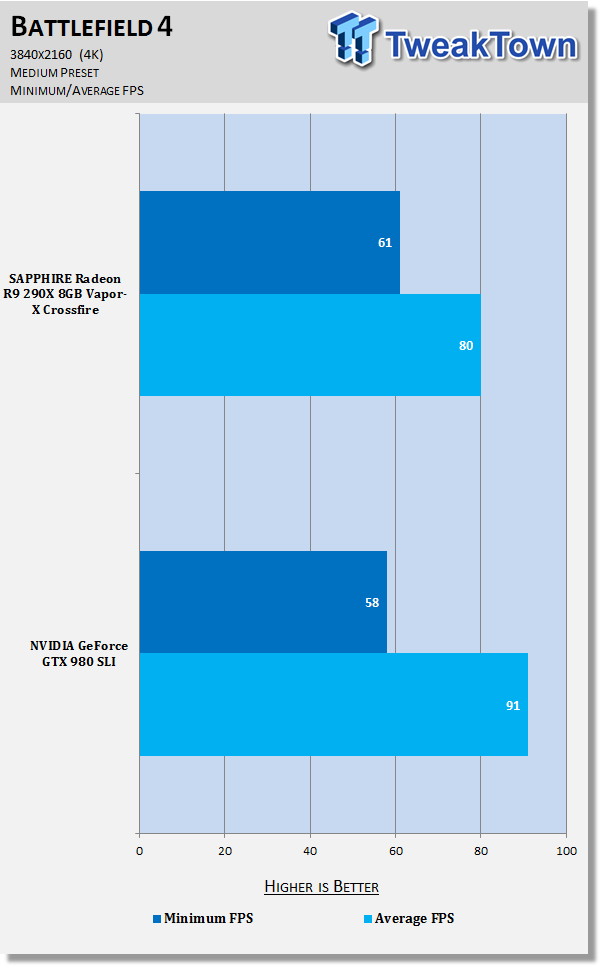 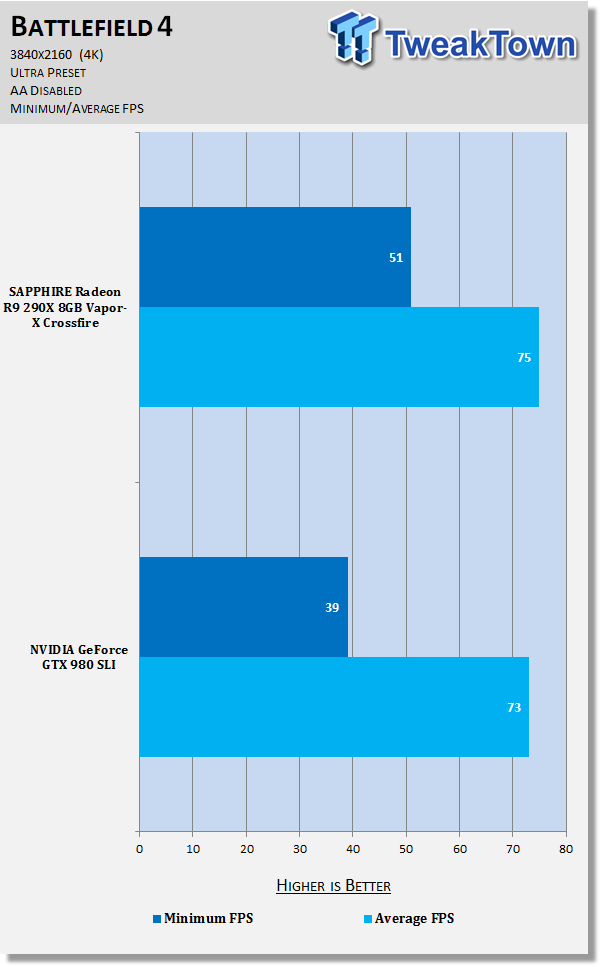 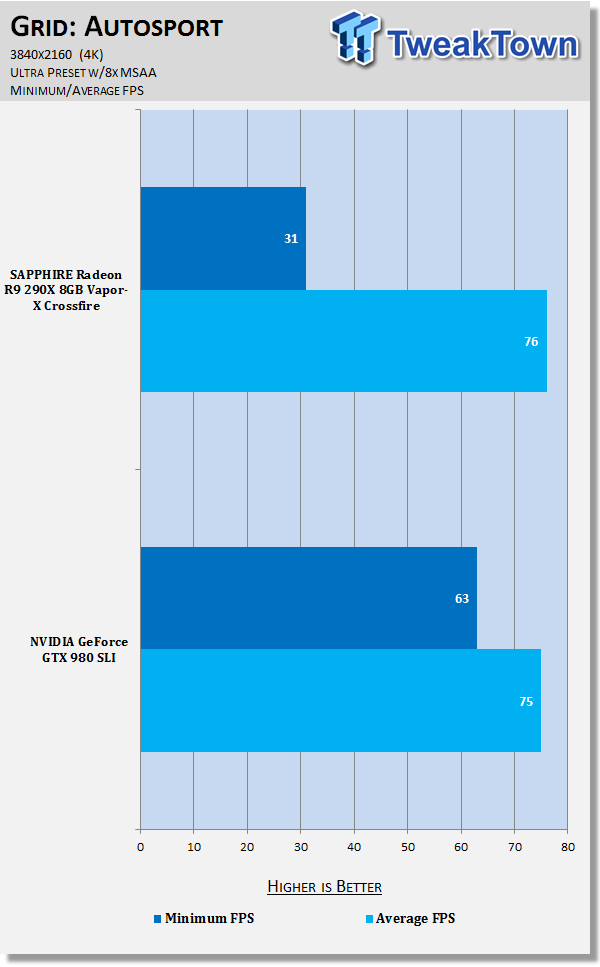 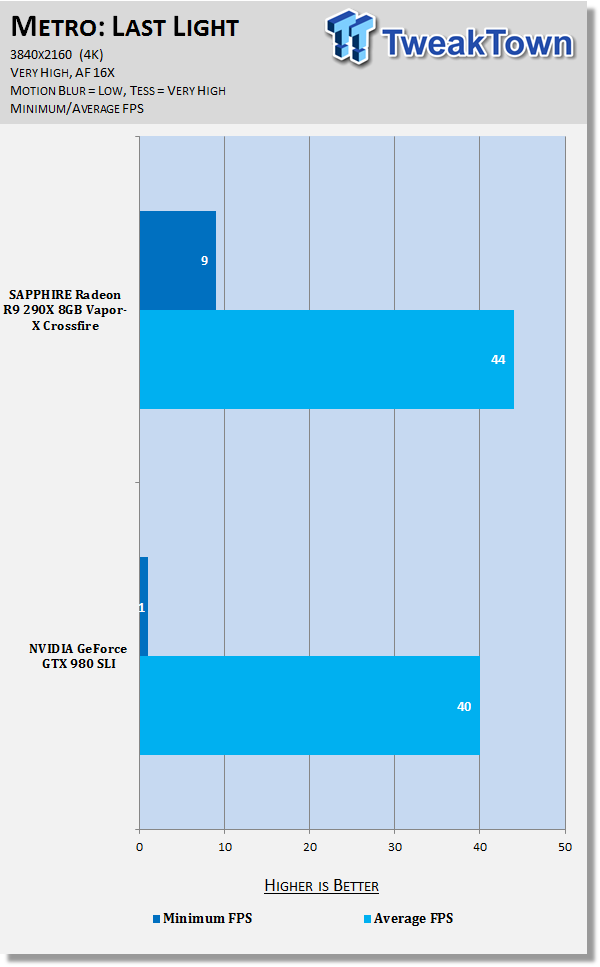 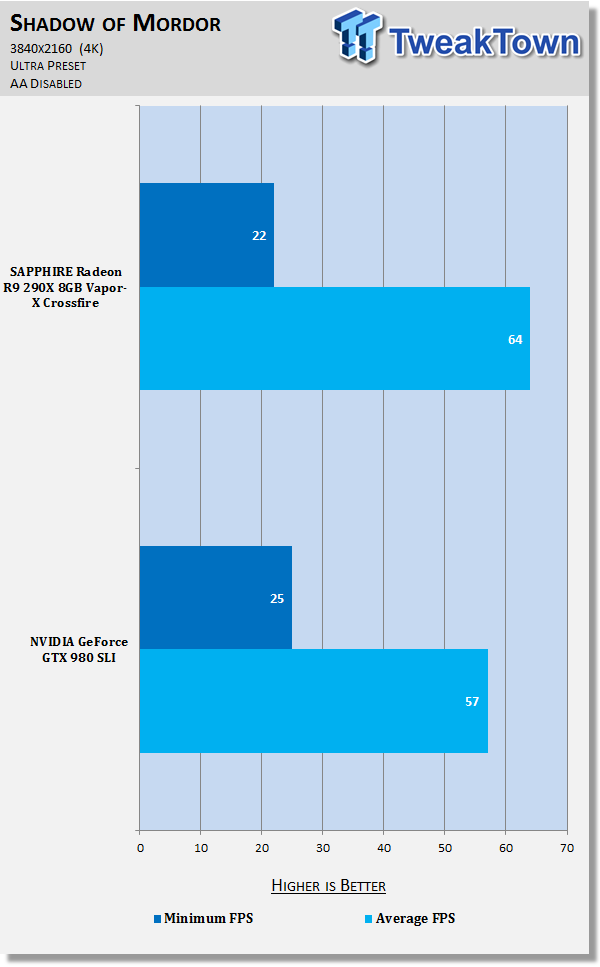 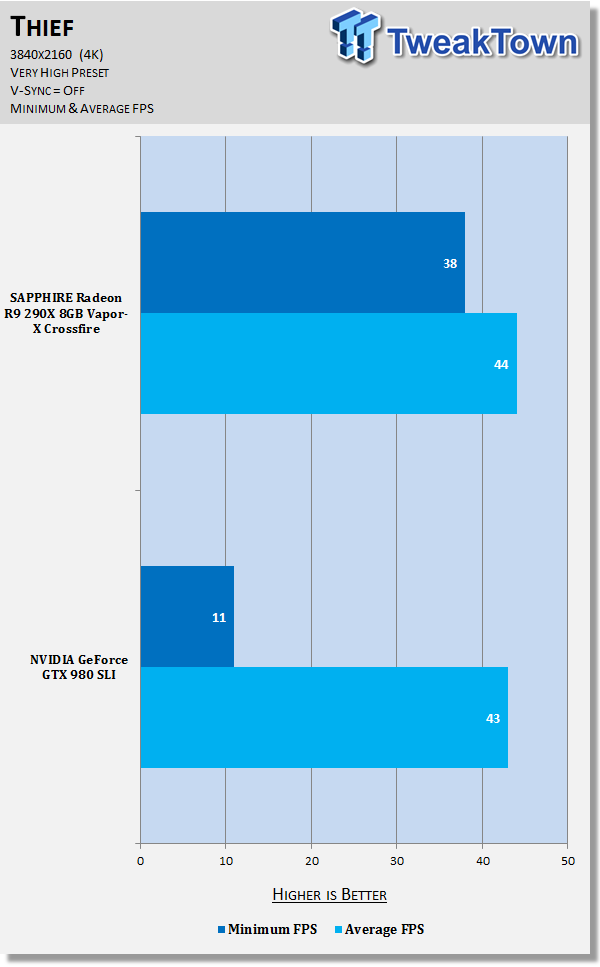 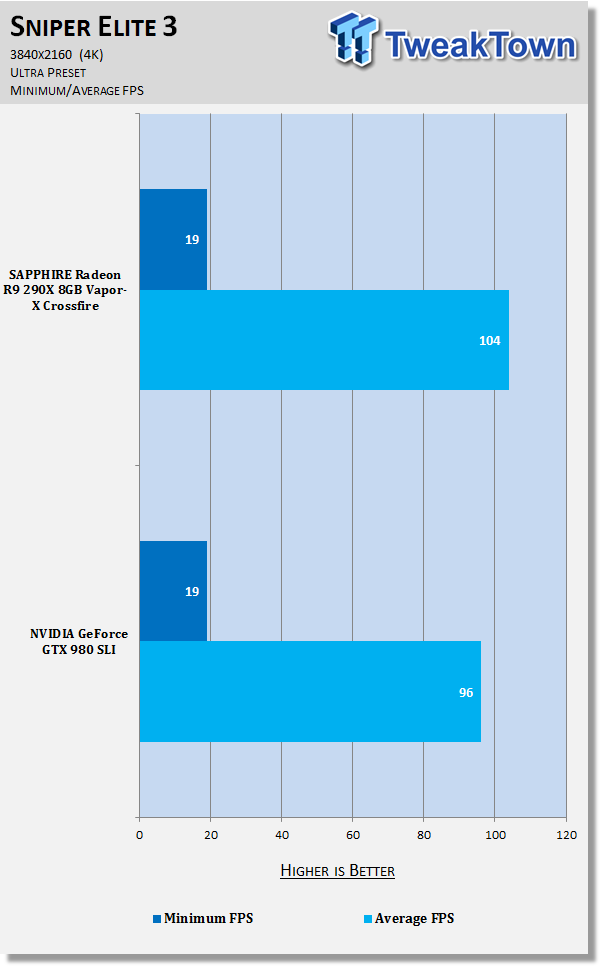 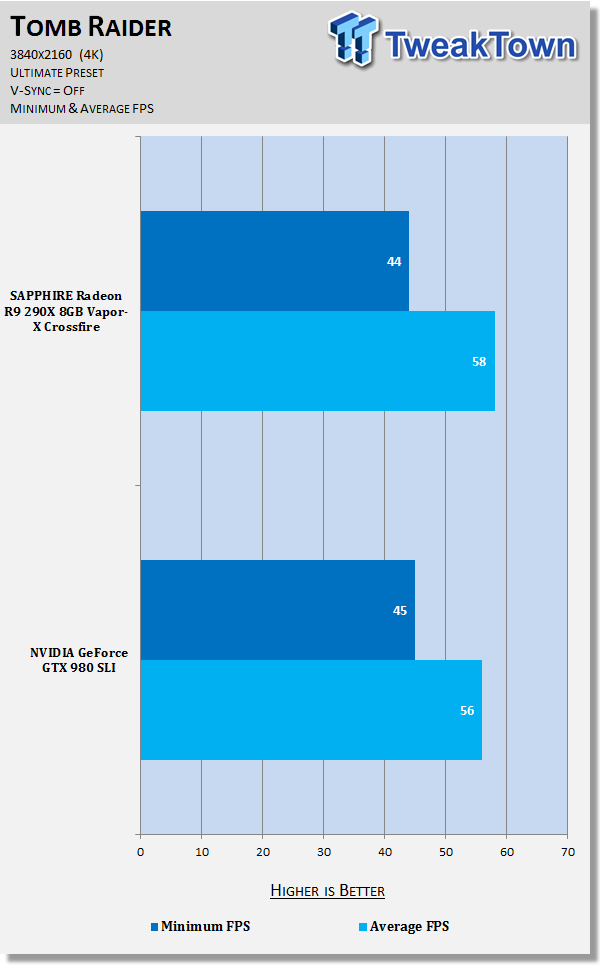 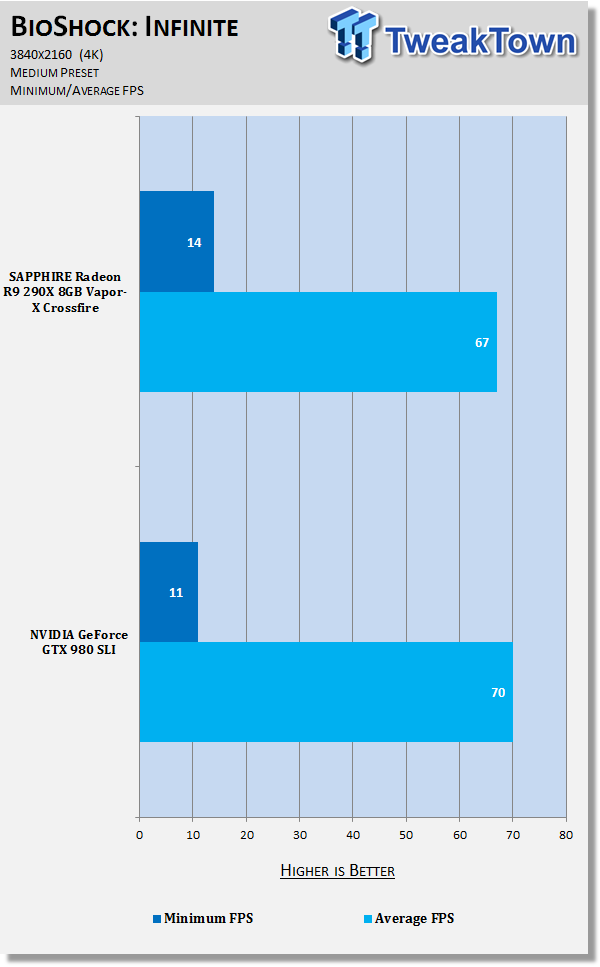 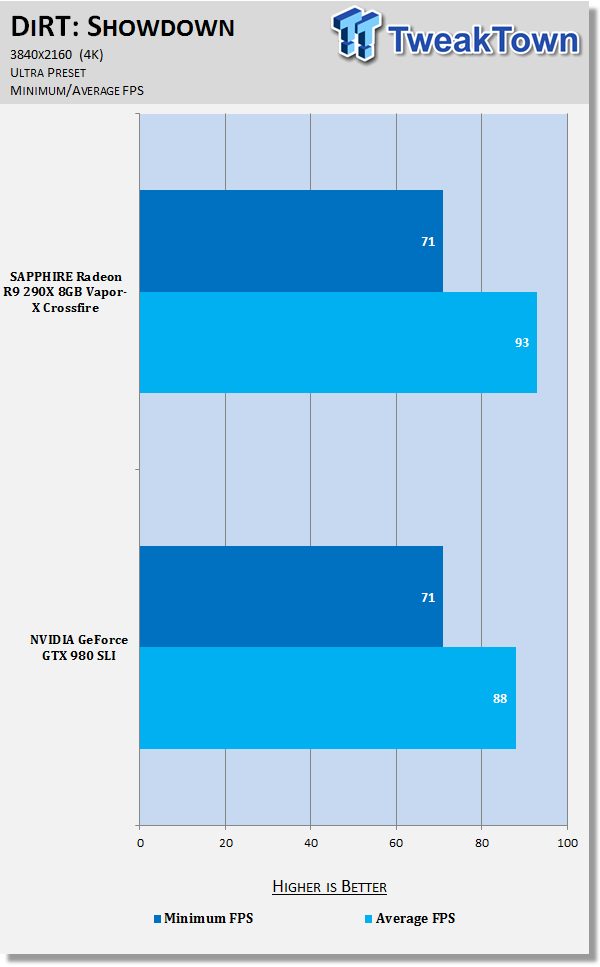 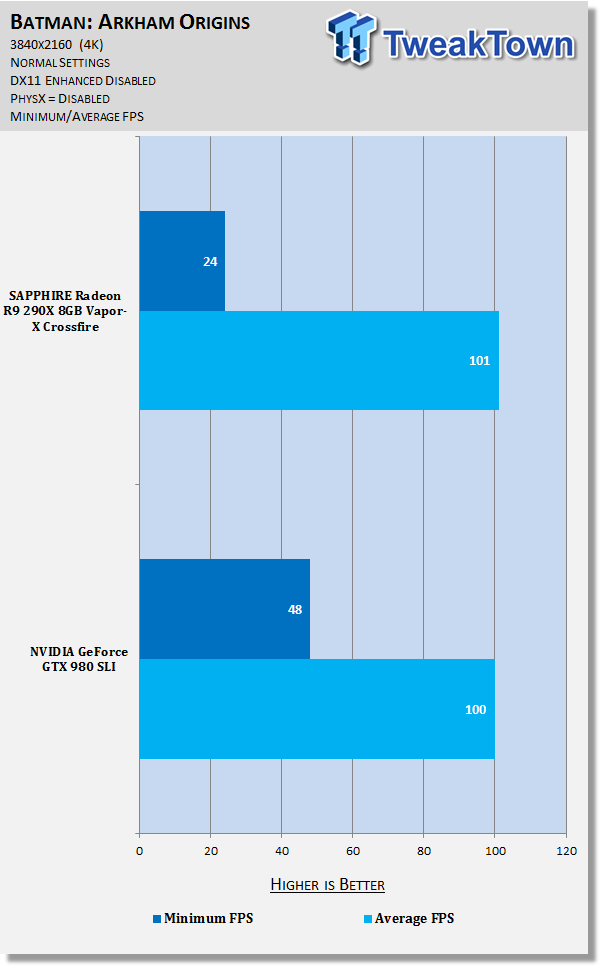 There you have it: two of the top end cards out right now in a multi-GPU configuration, battling it out at 4K. The results? Well, let's talk about that now, starting off with the synthetic benchmarks in 3DMark and Heaven. 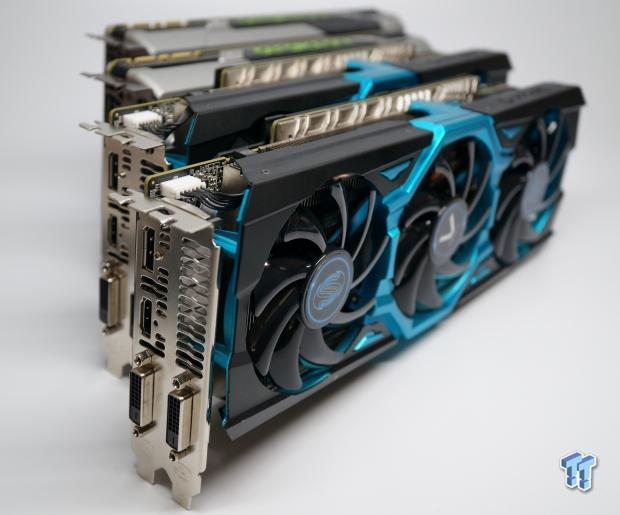 The additional VRAM on the SAPPHIRE Radeon R9 290X 8GB Vapor-X cards did nothing to help, with the GeForce GTX 980s with their 4GB of VRAM beating out the AMD cards by around 10%. Unigine Heaven results were the same, with around 10% additional performance to the NVIDIA side of the fence.

Then, we shift into our real-time gaming benchmarks with Battlefield 4 running at 3840x2160 on the Medium preset on a 64-player match on Paracel Storm. The R9 290X cards with their 8GB of VRAM have a slightly better start with the minimum FPS at 61FPS versus the GTX 980s in SLI and their 58FPS, but the GTX 980s jump far ahead with 91FPS average, while the R9 290X 8GB cards see just 80FPS average.

GRID Autosport has the GTX 980s in SLI completely owning the R9 290X 8GB cards in Crossfire when it comes to minimum FPS at 4K (with 8x MSAA enabled!), with the AMD cards pulling in just 31FPS minimum, while Team Green manages a huge 63FPS minimum. Both cards are next to equal when it comes to average FPS though, with 75FPS and 76FPS for the NVIDIA, and AMD cards, respectively. 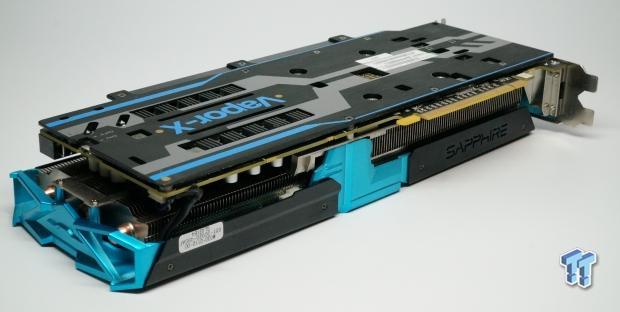 The 8GB of VRAM on our SAPPHIRE Radeon R9 290X Vapor-X 8GB cards really starts to shine in games like Metro: Last Light, where the minimum frame rate is 9FPS compared to just 1FPS on our NVIDIA cards. Thief is another title that really enjoys the additional VRAM, with 11FPS minimum on the GTX 980s in SLI while the Radeon R9 290X 8GB cards in Crossfire see a huge 38FPS. This is over 300% better, which is a huge win for AMD.

Out of all of our testing, the Radeon R9 290X 8GB cards come out on top in a big way in just two tests: Metro: Last Light and Thief. For the most part, the NVIDIA GeForce GTX 980s (remember, they're only reference cards) against the SAPPHIRE Radeon R9 290X Vapor-X 8GB cards (which are factory overclocked) are pretty neck and neck for most of our testing. 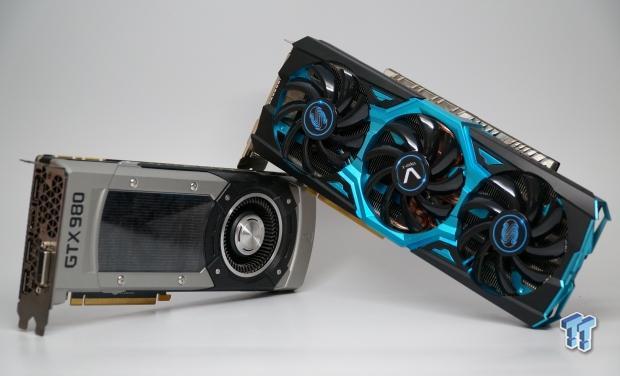 For our next article, we're going to cut down the amount of games to maybe half, and then we're going to really crank up the in-game settings with maximum AA and super sampling for some real VRAM torture testing!