Not too long ago we tested our SAPPHIRE Radeon R9 290X Tri-X GPUs in CrossFire at 4K, with some very surprising results. The Tri-X cards are some of the fastest consumer GPUs on the market, with some crazy headroom for overclocking. 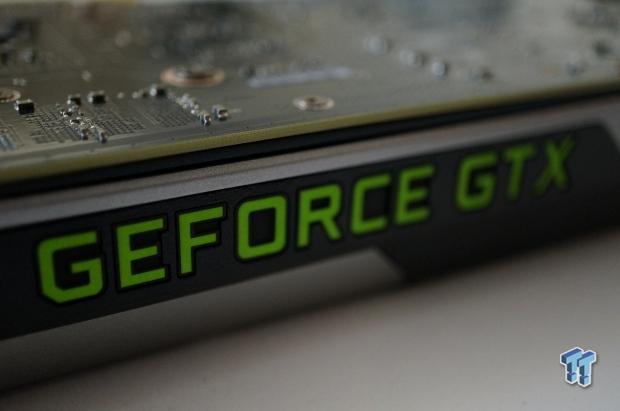 But, how does Team Green fare at 3840x2160? That's what we're here for today. We have two reference NVIDIA GeForce GTX 780 GPUs in SLI that we're going to test on our Seiki Digital 39-inch 4K TV.

We'd like to thank Corsair, Intel, GIGABYTE, and InWin for making this all happen - without you, we couldn't have done it. 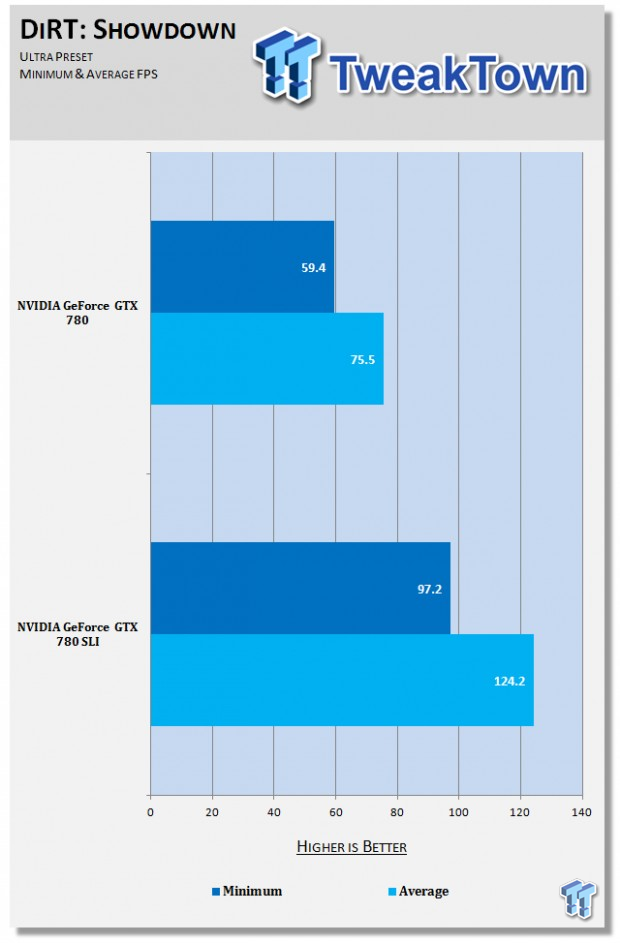 DiRT: Showdown's minimum FPS with our single GeForce GTX 780 was sitting perfect, at 59.4FPS, while the average was 75.5FPS.

Turning SLI on saw some perfect scaling, with the minimum FPS jumping from 59.4FPS to 97.2FPS, while our average increased from 75.5FPS to 124.2FPS. This means we could actually play DiRT: Showdown on 4K @ 120Hz, and achieve 120FPS average - impressive! 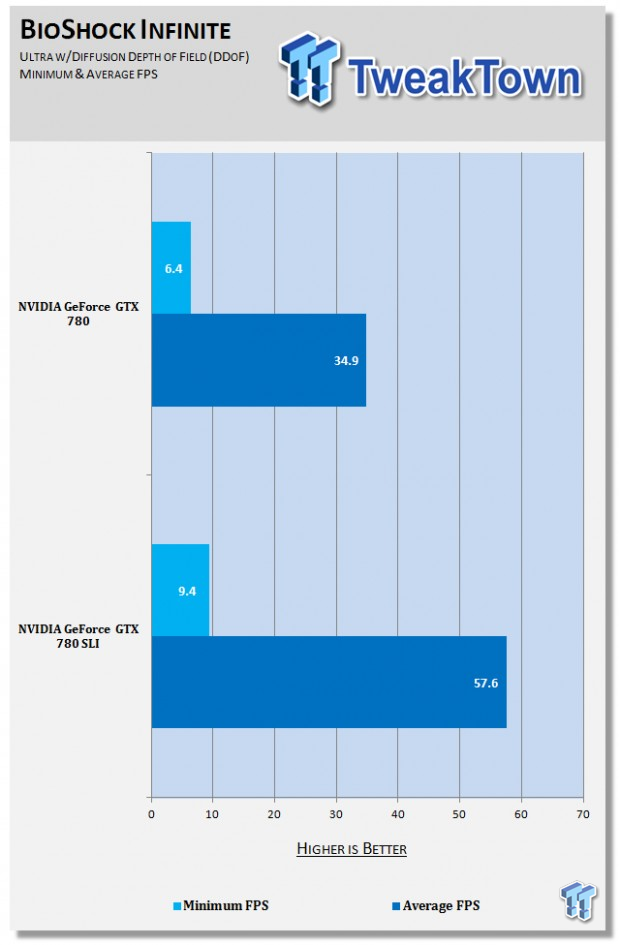 BioShock: Infinite is another game that scales well on our GTX 780 SLI setup, but starting with the single GTX 780, we have a 6.4FPS minimum - not good at all, but we're used to low minimum FPS on BioShock: Infinite. The average frame rate was actually quite good, at 34.9FPS.

Enabling our second GTX 780 saw the minimum and average frame rates both jump, with the minimum frame rate jumping from 6.4FPS to 9.4FPS. The average, from 34.9FPS to 57.6FPS. Edging very close to that 60FPS milestone. 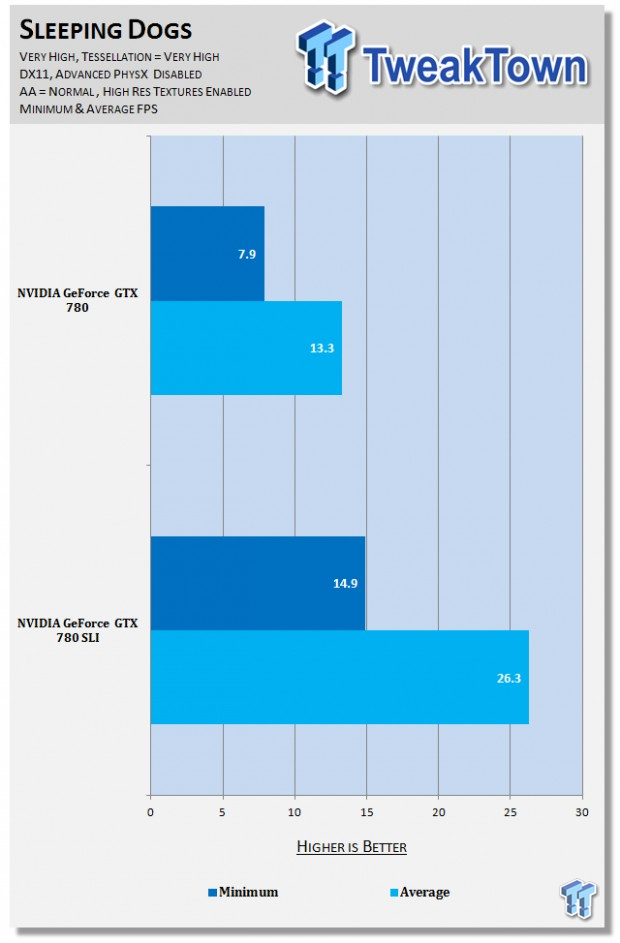 We start Sleeping Dogs off with a minimum of 7.9FPS on our single GeForce GTX 780, with the average frame rate hitting just 13.3FPS on the single GPU. 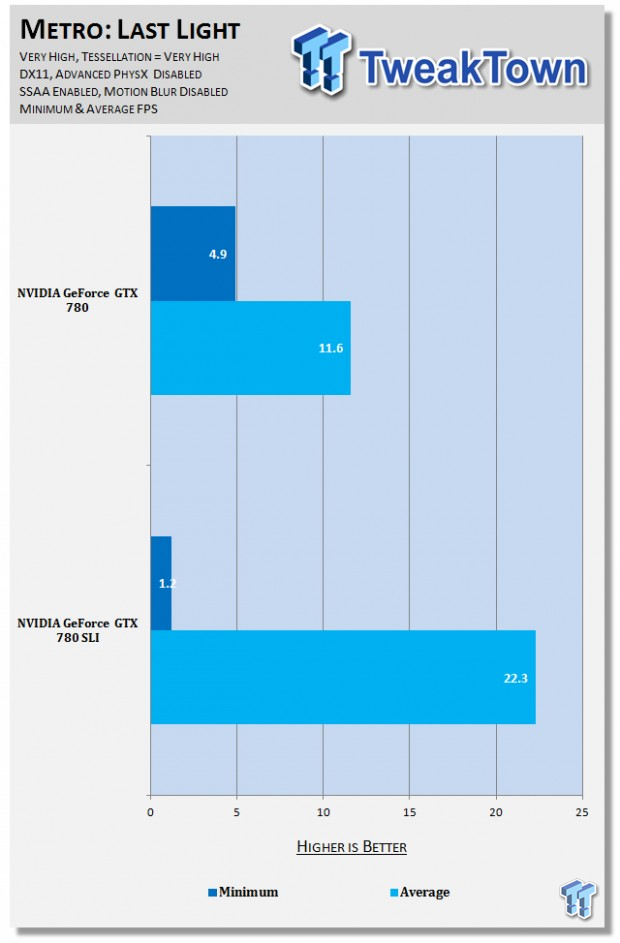 Yeah, wow. Metro: Last Light had some incredible scaling at 4K, a great way to show off your GeForce GTX 780 system. Starting with the single GTX 780, which provides 4.9FPS minimum, and an average of just 11.6FPS.

Turning SLI on, we see an instant change - but not with the minimum FPS numbers. Minimum FPS drops from 4.9FPS to 1.2FPS, but the average frame rate doubles, from 11.6FPS to 22.3FPS! 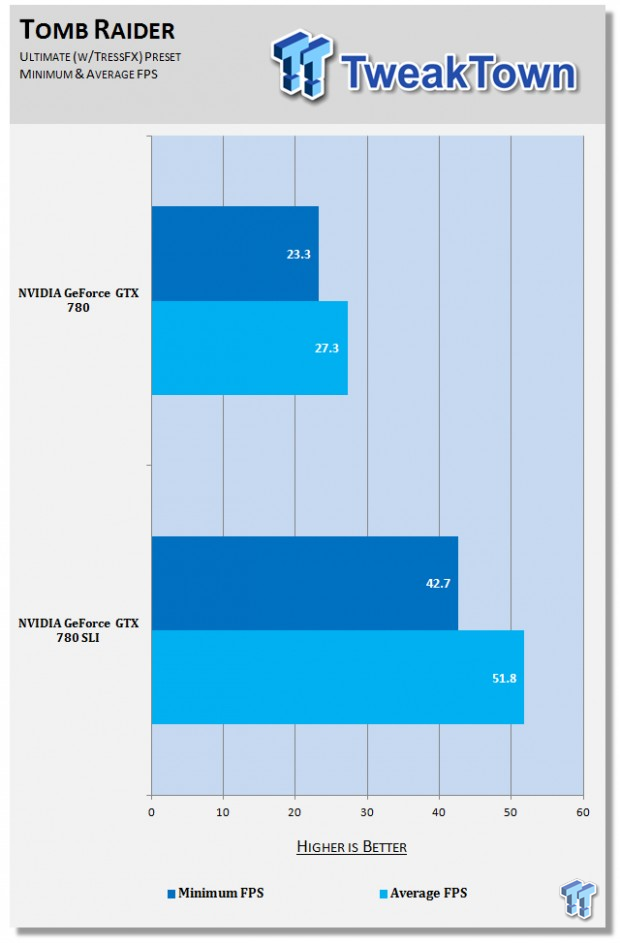 Turning on the second card, SLI provides us with nearly 100% scaling: 42.7FPS minimum, and 51.8FPS average. Increasing from 27.3FPS to 51.8FPS average is a huge sign that SLI scales very well in Tomb Raider at 4K. 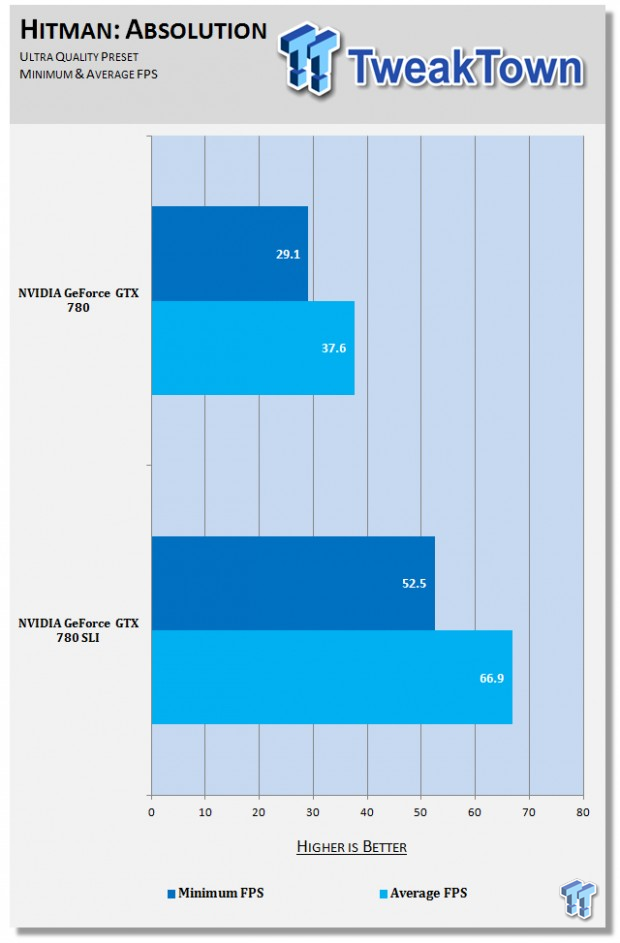 SLI changes things up considerably, moving from 29.1FPS to 52.5FPS with SLI enabled. We crank up the average FPS from 37.6FPS to 66.9FPS, a sign that our SLI setup is being utilized quite well. Hitting over 60FPS in Hitman: Absolution is a great result.

Well, scaling on the GeForce GTX 780s in SLI turned into quite the exercise of enjoyment: nearly 100% scaling in all of our games. NVIDIA has been at the forefront of 4K since its inception, something I saw in person at their Editors' Day in Montreal, Canada late last year.

Where to from here? 3- and 4-way testing hopefully, as well as some Titan's, which should get rid of any VRAM limitations we're hitting at this resolution. We'll also have a comparison between the GeForce GTX 780s and the Radeon R9 290Xs coming up soon, where we'll compare our results.